Bhumi Pednekar Is Having Lots Of Foodie Fun In London!

Bhumi Pednekar posted pictures of some delicious-looking grub, from one of the most well-known Indian restaurants in London, Indian Accent. 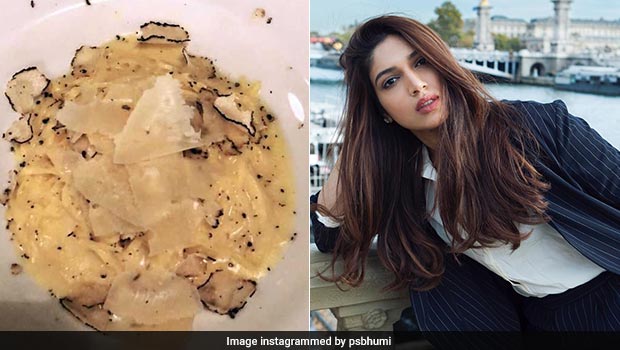 Highlights
Bollywood actor Bhumi Pednekar is currently in London and she shared some screenshots of her lunch at a famous Indian restaurant. The Shubh Mangal Savadhaan actor, who made headlines in 2015 for her amazing and dramatic weight loss, has become a household name. Bhumi won many accolades for her role in Toilet, Ek Prem Katha for playing a feisty young bride, opposite Akshay Kumar. More recently, Bhumi made it to the list of Forbes' 30 Under 30 list. She is currently prepping for her role in the upcoming release Son Chiraiya, where she will be seen opposite Sushant Singh Rajput.

Bhumi posted pictures of some delicious-looking grub, from one of the most well-known Indian restaurants in London, Indian Accent. Located at St. Mayfair, the restaurant is known for its inventive approach to Indian cuisine. It's a very popular spot for Instagram foodies who frequently share pictures of the beautiful and quirky dishes over there. Last night, Bhumi jumped on the bandwagon and shared pictures on her Instagram stories. Have a look! (Also Read: Shubh Mangal Saavdhan's Bhumi Pednekar Lost 25 Kilos in Just 4 Months!)

That looks amazing, doesn't it? But can you make out what those dishes are? Regardless, we guess you now know what the best place to dine at is, the next time you take a trip to London. Pednekar also expressed her love for the most expensive food ingredient in the world- truffle. Take a look:

"Just want to marry truffles", Bhumi wrote on a picture of what looked like a picture of pasta. For the uninitiated, truffles are underground fungi that resemble rough skinned potatoes. They're a culinary delicacy and are extremely difficult to cultivate and even hunt. There are different colors and varieties of truffles, but just a couple of shavings of a truffle can bump up the cost of your dish, by a couple of thousand rupees. But then again, there’s a reason it’s a delicacy the world over!

Watch: How To Make Bhindi Ka Salan To Spruce Up Your Meal
High-Protein Snack: Chicken Stuffed Tomatoes Is Just The Party Starter You Were Looking For