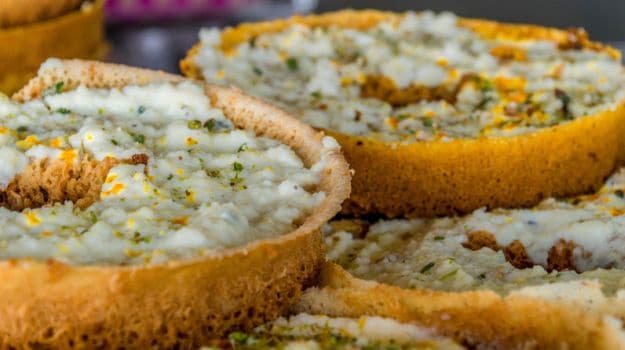 Hariyali Teej is a festival that celebrates the reunion of Lord Shiva and Goddess Parvati. This year, it is celebrated on 5th August 2016. Traditionally, ghevar (or ghewar), a Rajasthani sweet, is an integral part of the celebrations.

Rajasthan is a popular Indian state amongst tourists for a lot of reasons. Besides the majestic palaces and forts, the great Thar Desert or the splendid range of intrinsic handicrafts that are raved about endlessly, it is also the food that enthralls the visitors. That's the reason why, any trip to Jaipur is almost always accompanied by numerous requests, by friends and family alike, to bring back a box of ghevar, a traditional Rajasthani sweet, which is also known as the honeycomb dessert.

It wouldn't be wrong to compare ghevar to the European concept of tarts. They draw a few similarities. The Indian sweet is a circular disc made of maida (all-purpose flour), which is mildly fried in moulds, soaked in sugar syrup, filled with rabri and garnished with dry fruits. It is commonly available during the rainy season across all sweetmeat shops in the state, hitting a sales high during Teej.

While ghevar has its roots in Rajasthan, it is also loved in other northern and north-western states, namely Uttar Pradesh, Haryana, Delhi, Gujarat and Madhya Pradesh. In the olden times it was prepared only during the monsoon because the moisture in the air was essential to its making, and it was the most sought-after sweet during Teej and Rakhi. Slowly, it also started making appearances in other special occasions such as Makar Sankranti. In today's time, it is often available year-round in a few popular sweet shops across the north-western belt.

A Rajasthani sweet called Ghewar. It made its appearance in Arain's sweet shop yesterday and I have been feasting on it ever since. Available mainly during the monsoon season in Rajasthan as the moisture in the air prevents this sweetmeat from drying up - according to the shopkeeper who was selling it. Thus, though the temperatures are still in the 40s right now, the moisture from the intermittent rains allows Ghewar to rule the sweetmeat counters. Consists of mawa, maida, sugar syrup, liberal use of desi ghee and topped with delicious rabri. Restricting myself to one serving everyday so cannot wait for tomorrow. #arain #rajasthan #rajasthansweets #ghewar #indiansweets #indianfood #food #foodofrajasthan #sweetsofindia #ghee #rabri

What Makes Ghevar So Sinful?

We all know that ghee makes everything taste heavenly, and the decadent ghevar too is traditionally made using desi ghee. Walk down the streets of a few smaller towns in Rajasthan and you will find ghevar makers dedicatedly frying the honeycomb-like casings with utmost attention. The filigree texture is credited to the emulsion of ghee and water while making the batter, and how it is poured into the bubbling oil. The moisture in the air also contributes to the effect, making them light and airy, thus it is popularly known as the monsoon sweet.