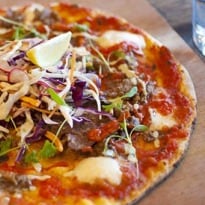 Boundary-pushing pizzerias are serving toppings that would make a Neapolitan swoon - and not in a good way. But some of them are delicious. Would you order a doner kebab pizza?

In Naples, there are militants who insist that there are only three truly authentic varieties of pizza: marinara, margherita and margherita extra, with buffalo mozzarella. Across wider Italy, the list of acceptable pizza toppings is tightly circumscribed. It's a decent bet, therefore, that Italians will hate the coming trend in Britain's pizzerias.

From Homeslice's oxtail and bone marrow pizzas to the Welsh lamb and mint pesto slice at Baravin in Aberystwyth, a new wave of restaurants is slipping the shackles of Italian orthodoxy and getting creative with toppings. In Manchester, at Artisan, you can even order a lamb doner kebab pizza. Yes, really.

More remarkably, unlike their Hawaiian and peking duck predecessors, some of these experimental creations actually work. Dressed with a soy glaze, Homeslice's mushroom, ricotta and pumpkin seed slice cleverly balances savoury depth, freshness and a nutty textural variety. "I'm not Italian, and I've never felt confined by the traditional toppings," says the New Zealand chef and co-owner, Ryan Jessup. "I didn't want any kind of gimmick, I just wanted to put flavours together that worked, using traditional processes and quality ingredients."

America's irreverent approach to "pie" was a key inspiration for Pizza East and Voodoo Ray's gently innovative gourmet pizzas, both in London. The latter sells a savoy cabbage and bacon slice, which anglicises the cult brussels sprouts and pancetta pizza sold at Motorino in New York. Using local ingredients is a hallmark of these new, upstart British pizzerias.

For others, getting creative just seems to be a natural progression. As a nation, we've finally got to grips with the basics of real pizza (proper 00-flour doughs; wood-fired ovens); the next stage is to put our stamp on it. At Pizzaface in Brighton, which tops its pizzas with lamb proscuitto, smoked tuna and chipotle chillies, or the Crate Brewery in London, which serves a laksa chicken pizza, the approach is pretty radical. Lardo, also in London, represents a quieter shift to more sophisticated Italian ingredients (porchetta, lardo itself), which are unheard of as pizza toppings in Italy.

"We're obsessed by food and we love playing around," says Lisa Richards, co-owner of Great British Pizza Co in Margate, whose recent specials have included a Parma ham and nectarine pizza, and a take on Turkish lahmacun, topped with minced lamb, parsley and lemon juice. "And," she adds, "our specials always sell out."

As a co-owner of Pleb, a Lewes street food operation that serves authentic Roman pizza, Joe Lutrario doesn't particularly like this trend. He and his business partner still argue over whether to use onions or not, never mind braised lamb: "It's semantics, but at that point it probably stops being Italian pizza. Capers, olives and anchovies go really well with mozzarella and tomatoes and, in my opinion, there are probably only another 10 ingredients that do. We're pretty conservative."

However, in his other life as a senior reporter at Restaurant magazine, Lutrario predicts that "British" pizza could well take off: "Possibly at the expense of established places, such as Pizza Express. Local ingredients, local beers, pizza - it just works as a business model. Pizza is high-margin, relatively easy to knock out, and it doesn't encourage people to stay for long."

At Artisan, on a wood-fired pizza menu that also includes a (pretty awful) Thai curry number and a (pretty awesome) shaved potato and chorizo pizza topped with game crisps, the doner kebab is its biggest seller. It is a novelty dish, but a surprisingly effective one. After all, what is pizza but a flatbread? This is just an open doner kebab.

Artisan's executive chef, John Branagan, actually wanted to call these pizzas flatbreads, but watched Jamie Oliver fail to communicate his topped British flatbreads concept at Union Jacks. "We were too chicken," he says. "It's been done before and people have reverted to using the word pizza." Think of these new-wave pizzas as flatbreads, however (at Artisan, generally the ingredients aren't cooked on the pizza, but added after), and it all begins to make more sense.

Branagan likes to retain a pizza look by including some sort of tomato sauce, but he plays around with it to make it suitable. For example, the pulled pork pizza uses a BBQ sauce. On certain Homeslice pizzas, Jessup has dispensed with tomato sauce altogether, using beurre blanc on his mackerel pizza and a kind of creamed corn soup on his corn and chorizo. Get over the necessity to start every pizza/flatbread with a tomato sauce, and suddenly the potential variations are endless. "The base is just a carrier," says Branagan.

Not that Italians will be persuaded. "My father-in-law is Italian, a retired chef," says Branagan, "and he would pass out [at this]."