Bug Feast - Everything that Flies or Crawls Goes Into the Pan 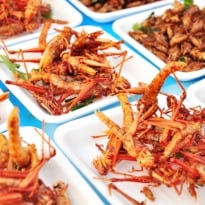 A feast fit for an Aztec king is making a comeback in Mexican restaurants serving some of the insect delicacies once relished by the country's ancient rulers.

It's not Montezuma's revenge, but can you stomach it?

From the corner cantina to the refined white-linen cafe, chefs are writing up menus that could make a foodie's skin crawl: furry worms, fly larvae and crunchy grasshoppers are just a few of the flavors being resurrected.

"The escamoles -- ant larvae that cost up to $100 per kilo -- disappear immediately," he said, referring to the eggs known as "Mexican caviar."

Ovadia freezes the eggs before frying them on a pan, otherwise the heat would make the precious caviar explode. He then serves them on a plate with guacamole and sprinkles dried chiles on top, returning some of the earthy texture of their former habitat.

His restaurant also serves the azotador, a worm with black fur, or shield bugs -- known as jumiles in Mexico -- that crawl around the plate with their six legs and wiggly antennae.

The jumiles, he explained, "make an impact when they are served alive because they taste better like that."

"We are experiencing nostalgia," Ovadia said, and chefs are seizing on this yearning for the past by "giving value to the land."

While such lively pre-Hispanic ingredients have now crawled their way onto porcelain plates of ritzy restaurants, they have long been standard fare at more laid-back joints, like Chon, in the capital's blue-collar La Merced barrio."Everything that walks, flies or crawls goes into the pan," said chef Fortino Rojas as he cooked an egg omelette with fly larvae.

One of his creations is a mix of ant larvae with chrysanthemum petals and mango sauce.

But Rojas warns that such foods may not last much longer because environmental pollution is destroying their habitat.

Next to the city's famed San Juan market, Pedro Hernandez sells bugs like crispy grasshoppers that are eaten with garlic and olive oil or lime as well as chunky maguey worms that live off the agave plant used to make tequila.

"We come here to buy them every rain season, we don't miss the chance," said Margarita Martin, a homemaker who bought half a kilo (one pound) of live, red maguey worms.

In June, Hernandez opened a restaurant, La Cocinita de San Juan, next to his shop where customers can try cooked insects or "buy the raw little critter and take the recipe home," he said.

Nicole Olivares, a medical student, tried for the first time fried maguey worms on a bed of sopes -- maize dough shaped in a circle.

"They're very good. They taste like meat," she said.

Her lunch partner, high school teacher Miguel Diaz, said the Mexican palate has "Westernized" and forgotten foods that "in addition to being tasty, are very nutritious."

The UN Food and Agriculture Organization not only believes that bugs have nutritional benefits, the agency even suggested in a recent report that they can help combat hunger affecting two billion people worldwide.

They can also act as an important supplement for children enduring malnutrition, the report said.

Gabriela Jimenez, an entomologist at National Autonomous University of Mexico, said the protein content of insects such as grasshoppers is double that of beef.

Listen to the latest songs, only on JioSaavn.com
"All insects have amino acid which is essential for humans, and their life cycle moves quickly. They become adults within two months of being born on average while a female produces 800 offspring."

Jimenez said Mexico, which competes with the United States for the title of the world's fattest country, will develop a bigger appetite for insects.

Comments"They are not fattening," she said. "You can make flour with any insect."