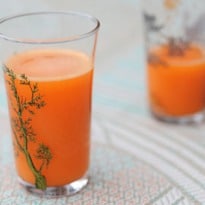 An easy-to-make winter mood-lifter, with a taste of the Seville sunshine and plenty of vitamins.

Seville is home to two of the wonders of the world - the Giralda tower and the Seville orange. The tower is a Berber minaret converted to form the bell tower of Seville Cathedral. If you ever get the chance to climb it, you should.

Inside its intricately carved walls, the Giralda has no stairs, but 34 gently sloping ramps that the muezzin once climbed on horseback to deliver the call to prayer. As you take your final steps towards the top, Seville opens out in front of you like the African savannah in that bit at the start of The Lion King. Look down and, at this time of year, you will see a neat orchard of orange-heavy trees in one of the cathedral's courtyards, each tiny fruit as easy to pick out as the matchstick people loitering beneath them.

Seville oranges, the bitter Citrus aurantium, have been traded between Britain and Spain since the 13th century, followed later by their sweeter cousins, Citrus sinensis. The former, most commonly devoured as marmalade, seems to be going out of fashion judging by supermarket sales.

However, come winter, the sweet orange remains one of the few things that stands between the British people and galloping scurvy. It is quite a miraculous fruit, nature's way of locking sunshine into a portable sun-coloured case and transporting it long distances.

This recipe, which twins it with the less celestial British carrot, was a staple on Leon's menu for years. It is a very simple combination and a perfect winter booster with betacarotene and vitamin A from the carrots, and vitamin C from the oranges. Ginger is so good for you it's a wonder the Chinese die at all.

Altogether, this is the perfect opportunity to dig out that juicer you bought in 1998 and haven't touched since.

Make your own carrot, orange and ginger juice

2 Mix with orange juice. For best results put all ingredients in the fridge the night before.