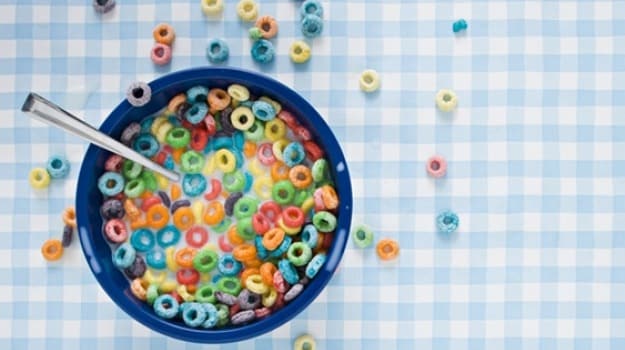 Cafe providing breakfast food at all hours of the day aims to 'reframe how cereal is seen'. Oliver Milman tries it out.

Cereal traditionalists may balk at the idea, but a new Melbourne cafe is pushing the revolutionary concept of shovelling down your Frosties or Cheerios in a public setting at all times of the day, even when at the cinema.

Cereal Anytime, which opened this week in Richmond, is serving more than 15 types of cereal for $4 a bowl, from 7am onwards each day.

Customers are offered a variety of healthy and treat options, ranging from All Bran and Special K to Fruit Loops and Coco Pops. For an extra $2, you can get a topping of blueberries, raspberries or raisins, or, if you're feeling rather adventurous, you can get Oreos or Maltesers on your cereal.

Perhaps surprisingly, this temple to a key pastime of students and the hungover has been launched by a physiotherapist, Bryan Robertson.

The idea of a cereal cafe isn't entirely new - Cereal Killer Cafe opened in London last year, offering over 100 cereals from around the world. The cafe attracted outrage in some quarters due to the price of cereal in an area with pockets of deep disadvantage, the sibling owners' hipster beards and the onward march of gentrification.

But for Robertson, Cereal Anytime's angle is portion size rather than sheer choice of flakes, loops and clusters.

"At the end of last year I was at a Rebels game down the road, I'd had a couple of beers and I didn't want a kebab - I had a craving for Milo cereal," Robertson explains.

"I had to go to a supermarket to buy a whole box, which didn't really work for me as a portion size. I thought 'why can't you have a store when you can have just one container of cereal?' It was 11pm so that's why I thought of cereal at anytime."

At first glance, Cereal Anytime looks like many of the other fashionable, blonde wood-filled cafes that dot the inner suburbs of Melbourne. The difference is that there are boxes of cereal lined up proudly on the counter.

The initial dilemma is whether to go for a childhood favourite - I was always a Frosties fan, despite finding Tony the Tiger's carry-on a tad wearying - or something completely new.

Robertson will be getting a new international cereal each Friday from the US, UK, New Zealand or South Africa, the country he grew up in. My eye is drawn to Cinnamon Toast Crunch, an American offering that has flakes with faces on its box and a rather alluring cinnamon swirl logo.

I team the cereal with blueberries and pick my milk - being Melbourne there are lactose free and gluten free options everywhere - and eat from the supplied container. My calculated risk pays off - the cereal is more cinnamon than sugar and goes well with the fruit.

My dining companion opts for Coco Pops with raspberries. Coco Pops, Robertson tells me, has been the initial frontrunner in customer popularity stakes.

"It's interesting to see those child-like memories from people who come in and buy cereal," he says. "Everyone loves cereal. They come in and say 'I haven't had Coco Pops since I was young. Maybe I'll give it a go again.'"

Robertson has worked with nutritionists on the menu, offering the "treat" cereals in a 425ml tub, smaller than the healthier options. This nutrition advice will be freely dispensed to customers.

"If you try to buy eight bowls of Fruit Loops, someone will step in and say something," Robertson said. "Cereal has got such a range, half the spectrum is healthy, the other is for treats and is OK to have in moderation."

Although my morning routine involves cereal - Bran Flakes if you must know - the idea of eating outside a breakfast time zone feels inappropriate. Robertson assures me that others are more freewheeling with their bowls and spoons, regularly munching on cereal at work in the afternoons and even for dinner.

This cereal timeframe will be stretched further by Cereal Anytime. The pop-up store is within the Swan Street Chamber of Commerce, a handsome former Commonwealth Bank building that now holds a number of boutique food and drink offerings.

The first floor of the building contains a small cinema, where Robertson envisions people watching classic films while spooning Malteser-covered cereal into their mouths.

Nice touches abound in this place - there's a "pay it forward" scheme where you can contribute money toward a meal for a disadvantaged person.

"We won't be making big profits here," Robertson says. "We want to reframe how cereal is seen. Which is certainly a bit different from physiotherapy."

Cereal Anytime will be around for the next nine months, before the building is turned into a pub.

Top photo:  A bowl of cereal with milk. Photograph: Alamy