Children are being 'bombarded' by junk food ads, research has found 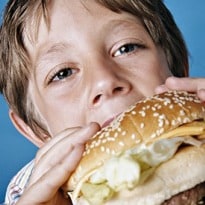 Children are being "bombarded" with as many as 11 advertisements for junk foods during an hour's viewing of family-orientated television shows such as X-Factor, The Simpsons and Hollyoaks, research has found.

Campaigners are calling for the ban on the advertising of products high in sugar, salt or fat - which currently only applies during children's programmes - to be extended to the entire broadcast output shown before the 9pm watershed. An alliance of organisations, Action on Junk Food Marketing, is urging ministers to close what it calls "a glaring loophole in junk food marketing".

The findings stem from an analysis of 784 adverts on popular ITV and Channel 4 shows during 20.75 hours of programming between October and December 2013 by Rosa Whalen and Emma Boyland of Liverpool University's psychological sciences department. KFC, Lindt, Haribo, Coca-Cola and Cadbury, as well as the Aldi and Morrisons supermarket chains, were among the brands advertising their products.

"Parents don't expect their children to be bombarded with ads for unhealthy food during primetime television, but that's exactly what happens," said Simon Gillespie, chief executive of the British Heart Foundation.

A government spokesman said the rules were being kept under review and it recognised the calls for increased restrictions on junk food advertising.

Photo: Campaigners want a ban on junk food ads to be extended to the entire broadcast output shown before the 9pm watershed. Photograph: Jean Michel Foujols/Corbis