Dinner in 25 Minutes! This Main From Spain is Anything But Plain: Recipe 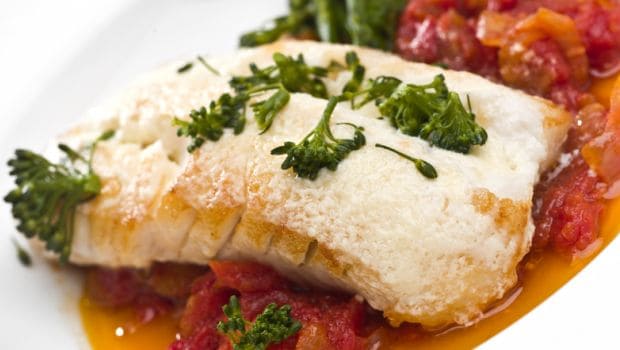 Highlights
Restraint and depth are the key words for this recipe. The dish is featured in the new "Curate: Authentic Spanish Food From an American Kitchen," by Katie Button with Genevieve Ko (Flatiron Books); the former is a chef-restaurateur and ex-neuroscientist who interned at El Bulli in Spain, now owns two restaurants in Asheville, N.C., and is well respected by Washington's own superstar Spanish food ambassador, José Andrés.

So, restraint: a relatively few ingredients, not the least of which is a cup of seafood stock. (In testing, I used frozen-defrosted shrimp-shell broth I had on hand.) And depth: the chunky, quick-cooking sauce that benefits from that stock and a sweet pimenton. There's enough sauce to warrant generous portions of crusty bread on the table.

Cod With Tomato Sauce and Garbanzos

Cod's an easy fish for home cooks, especially when they choose thick, center-cut fillets. Here, the quick sauce tastes as if it's long-cooked.

This is a tapas-friendly dish as well; break the fish into bite-size portions and serve on small plates. Be sure to use sweet, not hot, Spanish smoked paprika, so you don't overwhelm the fish.
Serve with rice or crusty bread for sopping up the sauce.

Heat a tablespoon of the oil in a large saute pan over medium-low heat. Add the garlic and cook for about 30 seconds, then stir in the onion. Cook for about 5 minutes or until translucent. If the onion seems dry, add a splash of water.

Add the tomatoes and their juices, the bay leaf and rosemary. Cook for about 7 minutes, then add the seafood stock, garbanzo beans and Spanish smoked paprika. Increase the heat to medium-high; once the mixture comes to a boil, reduce the heat to medium-low and cook for 5 minutes.

Meanwhile, mince the parsley and add it to the saute pan along with 1/4 teaspoon salt, stirring to incorporate. Remove from the heat; discard the bay leaf and rosemary sprig.

Heat the remaining 2 tablespoons of oil in a large nonstick skillet over medium-high heat.

Use 1/2 teaspoon of salt (total) to season the fillets on both sides. Once the oil shimmers, add the fillets to the skillet, skinned sides up. Cook for about 3 minutes, until the fish is golden brown and releases easily from the pan.

Carefully turn the fillets over, then pour in the tomato-garbanzo sauce. Cook for 3 or 4 minutes, until the fish is opaque throughout and the sauce is bubbling.

Promoted
Listen to the latest songs, only on JioSaavn.com
Divide the fillets among individual plates; spoon the sauce over and around the fish. Serve hot.