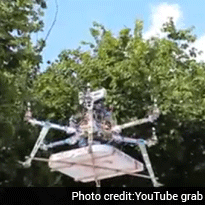 Mumbai Police has registered the drone pizza delivery under its scanner. The usage of unmanned drone for delivery purpose was first of its kind in India. The local police is set to seek an explanation from the pizza outlet on as to why it did not inform them before carrying out the experiment.

Police will also ask Air Traffic Controller whether Francesco's Pizzeria outlet had a correspondence with them. When contacted, an ATC official said he did not know whether the outlet had sought permission from them. The official, however, categorically stated, "As per
norms, permission must be taken for flying any such object."

"We are very sensitive towards anything that flies in the sky with the help of remote control. We will certainly ask the outlet's administration as to why it did not inform us before carrying out this experiment. We also seek full details pertaining to the drone test," said Madhukar Pandey, Additional Police Commissioner

"We will also ask the ATC if it was consulted by the outlet. After studying all the aspects, we will decide the future course of action," Pandey said.

According to sources, terror threat has been lingering over the city and inputs available with police suggest that terror organisations might strike using paragliding and unmanned drones. During special occasions such as Independence Day and Republic Day, certain city areas are declared as 'no flying zones' by Mumbai Police. In these areas, paragliding and use of remote-controlled micro-light aircraft is also not allowed.

On May 11, the financial capital, notorious for its traffic snarls, achieved a first in the country after Francesco's Pizzeria used an unmanned drone to execute a delivery by taking the aerial route. The unmanned drone successfully delivered a pizza to a customer 1.5 kms away. Francesco's Pizzeria chief executive Mikhel Rajani yesterday stressed that this was only a test-flight but its results confirm that it can be used routinely in a few years.

Promoted
Listen to the latest songs, only on JioSaavn.com
A four-rotor drone took off with the order from its outlet in Lower Parel area and delivered it to a high-rise building in adjacent Worli area, Rajani had said, claiming that it was for the first time that the ubiquitous drone was used for such a purpose in the country.

The eatery, which has been in operations for two years, made a video of the delivery, and an auto engineer friend helped with making the flight possible.