All You Can Eat: Are Edible Spoons the Future of Cutlery? 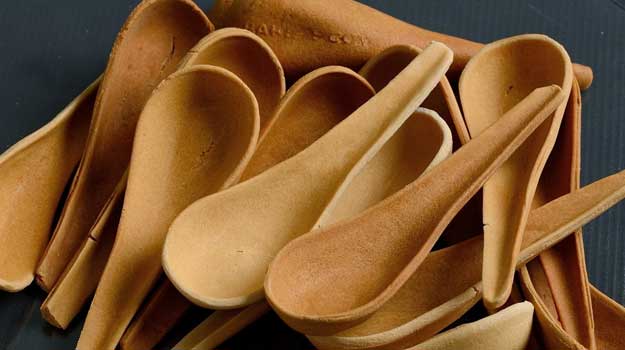 Picture this. You’re at a party where a delicious dinner is being served and you learn that you can eat the spoons too! Better still, if you’re the host, you don’t have to worry about doing dishes. Globally, chefs and food companies have been playing with this idea for some time. A while ago, KFC unveiled its first edible coffee cup made with biscuits. British celebrity chef, Heston Blumenthal, has served edible cutlery made with chocolate dusted silver and salted butter caramels in edible cellophane. In India, we’ve borrowed the concept but with a difference. Or perhaps, to make a difference.

(At KFC, the Fried Chicken is OK, but the Cups are Delicious)

Bakey’s was established in 2010 in Hyderabad not to propagate a trend but to provide a solution to many pressing problems. It was a creation of Narayana Peesapaty, a former researcher with ICRISAT. He started innovating in the world of edible spoons as an alternative to disposable plastic cutlery. His aim was twofold. “During my research on groundwater management and related issues, I found that most open wells had gone dry as rich jowar belts were being replaced with rice that uses 60% more water for production. I realised that the solution to the depletion of groundwater was to create markets for less irrigation crops such as jowar which is the primary ingredient in the cutlery that we make. At the same time, I also wanted to address the issue of cheap plastic cutlery,” shares Mr. Peesapaty.Scientific research has given a good reason to think carefully about the use of plastic. Be it the pet bottles that store water at home or the cutlery often used by street vendors, plastic is everywhere and even in your food. A petroleum by-product, any type of plastic is made with certain chemicals that can leach into food. Bisphenol A (BPA), toxins, endocrine disruptors and carcinogens may migrate from the containers to the contents. “For cutlery, one of the following may be used – cheap plastic, food grade plastic, biodegradable plastic or coated plastic. Food & Drug Administration (FDA) requires that plastics used in food packaging be of greater purity than plastics used for other purposes. This is commonly referred to as food grade plastic. According to Indian guidelines, food grade plastic where leaching of chemicals is less than 60ppm is considered safe. In the United States, the permissible limit is lower - 45 ppm. But, why should we expose ourselves to even 1ppm of chemicals being leached into our food?” expresses Mr. Peesapaty.

“The metallic-looking plastic cutlery that may seem appealing is coated with nickel, chromium and lead. When it scraps the surface of your palate, the coating can easily come off.  When plastic is biodegradable, it’s nothing but easily recyclable. To top it all, it’s actually the cheap plastic that captures about 95% of the market share. This cheap plastic is often recycled which further degrades the quality,” he adds.

If we were to go by numbers, India uses about 120 billion pieces of disposable cutlery every year. We’ve used them at birthday parties or many other events and mostly at street stalls. Ironically, some places may not even dispose the cutlery, simply wash and reuse it promoting the risk of bacterial contamination. Mr. Peesapaty recalls, “I once ordered idli-sambar at a restaurant where I was given plastic spoons to eat with. I ran my thumb over it and found that it was all greasy and seemed used. This is common at chaat shops or with street food vendors.”

With focus on health and nutrition, there are three basic ingredients that are used to make the cutlery – jowar, rice and wheat flour. The quantity of each ingredient varies according to the type of the spoon. What’s so special about jowar? “A lot and it’s sad that this nutritious grain is highly underrated. It has something for everyone. Pregnant women and lactating mothers require high stores of calcium and iron, and jowar is naturally rich in both nutrients. During adolescence, one goes through several hormonal changes that may cause stress. Jowar contains niacin and folic acid that act as stress busters. Jowar is great for diabetics. The complex carbohydrates present in it releases glucose slowly and helps maintain blood sugar levels,” he suggests.

After many trials for texture, sogginess, hand feel and utility, they managed to come up with a viable product. To add a splash of colour, they mix in spinach, beetroot or carrot pulp. There are no emulsifiers, additives, fats or preservatives – only natural ingredients. The dough is baked at high temperatures in moulds in semi-automatic machines. You may think they’re fragile but jowar gives them a hard and crisp texture, Mr Peesapaty clarifies. The material is tough enough to retain most foods and sauces, and is also easily digestible. When immersed in liquid (hot or cold) completely, they’d last for 10 minutes. Kept sealed in air-tight containers, they’ll stay fresh close to three months. They're usually neutral tasting but spices like pepper, kala namak and jeera can be added for flavor.

“We didn’t want to experiment with too many products. Plates weren’t feasible. Once placed on the table you may not want to eat them and in fact you shouldn’t for hygienic reasons. They'll end up in the bin which would add to wasteful resources. Even cups would crack easily and cause spillage. But we’re planning to create straws,” he informs. The unique venture started out distinctly exciting but baked into a bit of a disappointment due to lack of funding. This has created some constraints in using the appropriate technology and manufacturing many shapes. Future ambitions are a bit blurry as they’ve limited themselves to the lunch spoon while they raise funds.

“We’re working on educating consumers and encouraging them to make the switch from plastic . I’ve visited several manufacturing units around the country and was utterly disappointed to see some use only a piece of rag to clean the final products when extracted from the mould. These are simply packed and distributed without sterilization. Back home, most of us don't even bother washing them before use. There are many guidelines for food safety in our country but barely any norms for the production of utensils used for consuming food,” shares Mr. Peesapaty. In a very competitive market, hygiene is perhaps the first casualty.

The concept is an environmental no-brainer. These spoons decompose naturally within 3 to7 weeks and if eaten by insects or animals they do not disrupt the food chain. “You may wonder why we’d manufacture chopsticks given the small consumer base in our country but it’s for a larger cause. Most chopsticks are used in Japan but produced in China. Since they’re made of bamboo, there has been mass deforestation to create more land for bamboo cultivation. On the other hand, it’s a Japanese ritual to burn the chopsticks after use. Forests are depleting and carbon emissions are on a rise. With our edible and biodegradable chopsticks, we’re taking a small step towards the conservation of biodiversity,” says Mr Peesapaty while signing off. It's as fun to crunch into your cutlery as it is environmental-friendly. Plastic spoons are convenient but damaging, edible spoons on the other can cut down waste.

In 2006, this initiative was selected by the CII-USAID-World Resources Institute and listed among top ten sustainable businesses. The international scenario is no different. Dr Zoe Laughlin and Professor Mark Miodownik, co-directors of the Institute of Making at University College London have conducted a series of scientific experiments to find out if cutlery can be considered a part of the flavour of a dish. They organised a spoon-tasting dinner which was attended by materials scientists, psychologists and culinary luminaries such as Heston Blumenthal and Harold McGee.

Laughlin, who is an artist as well as a scientist, designed the spoons and got them electroplated with different metals that were not exactly edible but non-toxic. Participants were served a complex Indian dinner and the results were quite surprising.  While the zinc coated spoon made the baked black cod unpleasant, it enhanced the sweet-sour flavour of the mango relish. Tin was the perfect match for pistachio curry and the gold plated spoon paired well with sweets.  “I can imagine a spoon being part of a dish,” Heston was quoted saying.