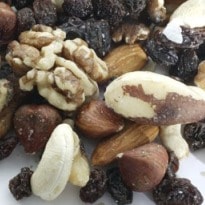 Study of more than 8,000 children in the US casts doubt on advice to pregnant women to avoid eating nuts

Advice to pregnant women to avoid eating nuts may have been not only misleading but at odds with the potential benefits for offspring of doing so, according to research that has found children could be less likely to develop nut allergies if their mothers eat nuts during pregnancy.

The study of more than 8,000 children in the US found that those with non-allergic mothers who ate nuts five times a week or more during pregnancy turned out to have the lowest risk of peanut or tree nut (P/TN) allergies.

A British expert said that while the results of the study were interesting, they contradicted other studies that have shown either no effect of nut consumption during pregnancy or suggested a possible risk from increased consumption.

"To make things even more complicated, there is also strong evidence to suggest that nut allergy doesn't develop until after birth and that it is exposure of the infant's skin to nut protein that is most important in the development of allergy," said Dr Adam Fox, consultant children's allergist at Guy's and St Thomas' NHS foundation trust.

"With such differing results from different studies, it is currently impossible to offer advice about exactly what mothers should do regarding nut consumption during pregnancy, but current international guidance is that there is no need to either avoid nuts, nor to actively eat them."

The results of the research, Prospective Study of Peripregnancy Consumption of Peanuts or Tree Nuts by Mothers and the Risk of Peanut or Tree Nut Allergy in Their Offspring, appeared in JAMA Pediatrics, a monthly peer-reviewed medical journal published by the American Medical Association. A total of 140 children who had nut allergies were included in the sample.

"Our study showed that increased peanut consumption by pregnant mothers who weren't nut-allergic was associated with lower risk of peanut allergy in their offspring," said the lead researcher, Dr Michael Young, from Boston children's hospital.

"Assuming she isn't allergic to peanuts, there's no reason for a woman to avoid peanuts during pregnancy."

At the end of the 1990s, it had been widely assumed that eating nuts risked sensitising children, making them more susceptible to nut allergies. Women in the US were advised to avoid all nuts if pregnant or breastfeeding, and to keep their children away from peanuts until they were three years of age.

However, the guidance was rescinded in 2008 because of lack of evidence. In the same year, experts from the UK's Food Standards Agency also said that women who are pregnant or breastfeeding do not have to avoid peanuts, even if there is a family history of allergy.

Young added: "No one can say for sure if the avoidance recommendation for peanuts was related to the rising number of peanut allergies seen in the late 1990s and early 2000s, but one thing is certain: it did not stop the increase.

"It was clear that a new approach was needed, opening the door for new research."

Online guidance from the NHS currently advises that pregnant women can eat peanuts or food containing peanuts (such as peanut butter) unless they are allergic to them or a health professional advises them not to.

It adds that previous UK government advice for pregnant women to avoid eating peanuts if there was a history of allergy (such as asthma, eczema, hay fever, food allergy or other types of allergy) in their child's immediate family has been changed on the basis of the latest research.

Photo: It was previously assumed that eating nuts during pregnancy risked sensitising children. Photograph: Frank Baron for the Guardian