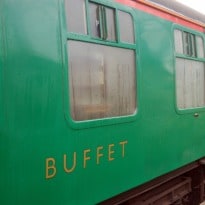 Twenty five-year-old Vrinda Kapoor often travels by train to meet her parents in Mumbai. However, she is unable to eat the insipid train food and is forced to binge on chips and biscuits. But not anymore, thanks to food portals that deliver to her favourite chicken pizza at her seat, guaranteed hot and fresh.

"Travelling is easier now as I can now eat whatever I like instead of the watery dal and bland subzis served by the pantry and are a sorry excuse for food," Kapoor, a student of Jawaharlal Nehru University here, told IANS.

Continental, Chinese, Italian, Mughlai and even fast food, varied cuisines are on offer by portals like comesum.com, travelkhana.com and merafoodchoice.com.

These portals, who have partnered with restaurants across the country, give their customers the freedom to order food from any famous eatery along the route.

The meals can be booked online or through phone by submitting train details or the passenger name record (PNR) number.

The customer can then choose any restaurant en route the destination and the meal is delivered at a pre-decided station. Payment can be made online as well as on delivery.

"Today's customers are quality conscious and know better than just to pick up food from an average hawker, they look more at multi cuisine delicacies," Abhishek Agrawal, managing director at Comesum, told IANS.

Comesum, started 40 years ago as railway caterers and apart from delivering meals in trains also operates 25 multi-cuisine food plazas that are open 24X7 round the year at railway and Metro stations in Delhi and around the country."We offer different cuisines to our customers but Indian food especially thalis (meal made of selection of several dishes) are quite favourite," said Agrawal adding that the cost of a thali ranges between Rs.80 and Rs.150 depending on the food items selected.

While Comesum offers food prepared at its own outlets, travelkhana.com and merafoodchoice.com have partnered with restaurants and eateries.

Travelkhana.com, which started operations in Aug 2012, has tied up with over 200 restaurants and caterers at over 80 stations and has delivered food to about 60,000 passengers.

"Indian Railways is the lifeline of passengers but the quality of food leaves a lot to be desired... we provide fresh food across all major trains and you won't have to depend on the pantry food anymore," Travelkhana CEO Pushpinder Singh told IANS.

At present, only 302 trains have pantry cars.

Describing Travelkhana's functioning, Pushpinder Singh said that GPS-enabled mobile applications keeps them updated about train delays and diversions. In case an order does not reach the passenger at a particular station, it is delivered at the next one.

Serving both vegetarian and non-vegetarian food, Pushpinder Singh has his eyes set on expanding to 30 new stations soon as well collaborating with more outlets.

"We are in talks with McDonalds," he said.

Meanwhile, Nashik based merafoodchoice.com, which started in Nov 2012 offers only vegetarian meals and specialises in thalis from different states.

"We are trying to promote the Indian food culture and offer thalis of various states," said founder Piyush Kasliwal adding that the portal is offering its services at 145 stations across the country and has so far catered to over 30,000 clients.

"The vegetarian thali, is priced between Rs.100 and Rs.200 and the customers don't mind the pricing because they know that they are getting quality food," added Kasliwal, who now plans to expand to 200 stations.

Listen to the latest songs, only on JioSaavn.com
With several complaints against the food served in trains, the portals have definitely come to the rescue of the people.

Railway Minister Mallikarjun Kharge recently told the Lok Sabha that 1,279 complaints about sub-standard food were received in 2012, of which 115 were for lack of hygienic conditions in superfast premier trains like the Rajdhani and Shatabdi Express.

CommentsSo, the next time you travel on a train, remember that your favourite butter chicken or masala dosa or chicken manchurian is just a call or a click away.