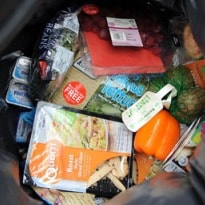 Report finds Britons are chucking out 4.2m tonnes of food and drink every year that could have been consumed

The average UK family is wasting nearly £60 a month by throwing away almost an entire meal a day, according to a new report that reveals the scale of the ongoing challenge to reduce household food waste.

Britons are chucking out the equivalent of 24 meals a month, adding up to 4.2 million tonnes of food and drink every year that could have been consumed. Almost half of this is going straight from fridges or cupboards into the bin. One-fifth of what households buy ends up as waste, and around 60% of that could have been eaten.

There has been no progress in reducing meat and fish wastage, with Britons still throwing away the equivalent of 96 million chickens every year. The top three foods being thrown away uneaten in British homes are bread, potatoes and milk. The equivalent of 24m slices of bread, 5.8m potatoes and 5.9m glasses of milk are being wasted daily, while even cakes and pastries make it into the top 10 most wasted items.

The study by the government's waste advisory body, the Waste & Resources Action Programme (Wrap), shows that since 2007, avoidable household food waste has been cut by 21% to 4.2m tonnes, saving consumers almost £13bn a year.

Wrap said that such waste should be cut a further 1.7m tonnes a year by 2025, saving up to £45bn. Its chief executive, Dr Liz Goodwin, called on retailers, manufacturers, governments and consumers to agree to a "major combined effort".

"Consumers are seriously worried about the cost of food and how it has increased over recent years. Yet as Wrap's research shows, we are still wasting millions of tonnes and billions of pounds," she said.

The main reasons for the waste are shoppers buying more than they need, lack of clarity around storage and labelling and over-estimating portions, Wrap said. The carbon associated with avoidable household food waste is equivalent to taking one in four cars off UK roads.

Last month the UK's largest retailer, Tesco, agreed to reduce its multi-buy items and other promotions after revealing that 35% of its bagged salad is being thrown out. It also found that 40% of apples were wasted, and just under half of bakery items.

Andrew Opie, British Retail Consortium director of food and sustainability, said: "There's plenty to be pleased about in these figures. Avoidable household food waste has been reduced by 21% since 2007 and the progress is all the more impressive if one accounts for the growth of 1 million new households within that time. Cutting food waste in the home needs to be one of the UK's biggest environmental priorities."

He said retailers know they are judged by the value they offer consumers "which means not only selling food at the right price but also making sure we can make the most of it. A range of approaches, including giving clear storage advice and recipe ideas, offering a wider range of portion sizes, and developing innovative packaging that extends the shelf life of products, has helped to drive significant reductions in the amount of food and drink we throw away."

Photo: The top three foods being thrown away uneaten in British homes are bread, potatoes and milk. Photograph: Nick Ansell/PA