Get Soaking: Now's the Time to Start Holiday Fruitcakes 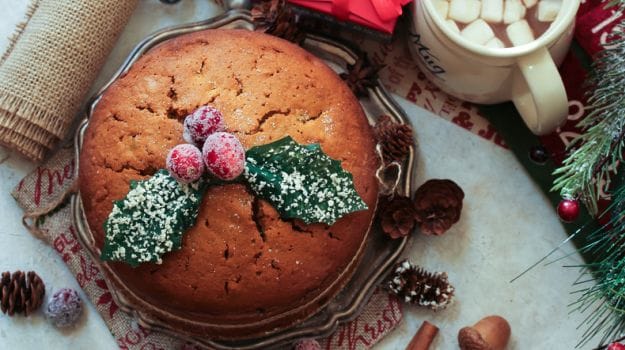 Highlights
Right now, 30 pounds of dried fruit are soaking in Yadira Stamps's kitchen. In liquor. In fact, it has been soaking for two years, waiting until it makes its way into some of the 130 fruitcakes the Panama native will bake this Christmas.

"I take two days off and make all of them at once," she says. "From morning until night, that's all I'll do."

The owner of Esencias Panamenas restaurant in D.C., Stamps grew up eating her mother's fruitcake. Miss Dolly, as her mother was known, made dozens of cakes for friends and neighbors each year until her death in 1990.

Among Panamanian expats in the Washington area, that fruitcake is a taste of home during the holiday season, often served alongside a slice of ham for a salty-sweet combination of flavors. Here in the United States, however, fruitcake is generally the butt of seasonal jokes about its density and unpopularity.

This much is true: Fruitcake is almost comically heavy - all that dried fruit bound by a soupcon of cake batter, redolent with spices, brandy and rum. But if you forget that it's a fruitcake, it just smells like Christmas.

Because fruitcake becomes more flavorful with age, fall is the time to start making it. In Stamps's Panamanian version, the fruit needs to soak first for at least 30 days in a combination of brandy, dark rum and port, although she also has developed a quick method for infusing the flavor into the fruit. Then she bakes the cakes just after Panama's Mother's Day on Dec. 8, so they're ready to deliver to customers by mid-month."That first Christmas, everyone started saying to me, 'We hope we're still getting our fruitcake this year,' " Stamps says. "I was like, 'No, I don't know how to make it.' "

It took her a few years to master it - "The first one was a disaster. The sugar didn't dissolve, you could feel the grains crunch when you took a bite" - but eventually Stamps came up with a recipe based on memories of watching her mother make fruitcake.

Richard Burr, on the other hand, likes to start fruitcake preparation in early October, just after his wife's birthday, although he sometimes doesn't get the baking done until after Bonfire Night, Nov. 5. A finalist on "The Great British Bake-Off" amateur baking competition and author of "BIY: Bake It Yourself" (Quadrille, 2015), Burr says in an email that "you can make it closer to Christmas, but it won't taste as rich. It gets much, much better with age, so six to 12 weeks before Christmas is ideal."

Whether it's Burr's classic British recipe or the Panamanian variation, alcohol is a key part of the process. Stamps's fruitcake relies on soaking the fruits well in advance of baking, while the British version is baked first, then brushed every few days with brandy or rum in a process called "feeding" the fruitcake. Either method allows the liquor to help develop deep flavors over the course of weeks or months. "Most home bakers start talking about making theirs in October," Burr says, "mainly so we can soak as much brandy into them as we can, and for us, it's a real focal point of our Christmas."

PJ Hamel, senior digital content editor with King Arthur Flour and a fruitcake aficionado, prefers to feed her fruitcake with a mixture of simple syrup and rum. "I don't like to brush with straight liquor," she says. "I find it can give the cake too 'liquory' a flavor, especially if you don't use a top-quality liquor."

But what about that aged cake; is it safe to eat when it has been sitting around awhile? Hamel says
she thinks so, because liquor and sugar are preservatives. In England, long-term storage was once the rule: Burr notes that a fruitcake traditionally made up the top tier of a wedding cake and was saved to be served as a christening cake. "As the U.K. has become much more secular, this is less common," he says. "I also think people have become more squeamish about saving a fruitcake for years between a wedding and christening. There's a perception that it's a bit unhygienic."

USDA guidelines state that fruitcake can be stored for one month at room temperature, six months in the refrigerator and a year in the freezer. A food safety researcher at North Carolina State University said in 2014 that the low moisture content of dried and candied fruits, plus the preserving properties of alcohol, could make fruitcake shelf-stable for at least several months.

Hygiene concerns aside, the real problem that most people seem to have with fruitcake is simple: the candied fruit.
"I honestly think it's the citron and mixed peel that most people object to," says Hamel. "They're strong and bitter-flavored. I make fruitcake with dried pineapple, apricots, cranberries, golden raisins, apples and dates: in other words, my favorite dried fruits, ones I like to snack on by themselves."

Although celebrated Southern food expert Nathalie Dupree famously declared her dislike of fruitcake many years ago, she included a recipe for Georgia Fruitcake - attributed to chef Anne Sterling - in her classic 1986 cookbook "New Southern Cooking." It is a clear example of Hamel's point: packed with dried peaches and pecans, then moistened with peach nectar and brandy, creating a heady, peach-laden loaf that's golden and inviting, without a dyed green candied cherry in sight.

For Stamps, however, that multicolored and candied mix of cherries, lemon and orange peel, citron and pineapple is a requirement, though she prefers to chop it finely. "That's the only kind of fruit we use in Panama, along with raisins," she says. "Sometimes people might use prunes or dried dates, but that would only be if they couldn't find the other fruit." It is mixed with mincemeat, an aromatic blend of apples and raisins, plus spices typically used in tarts and pies.

She also has a special ingredient that she's able to find only in Panama: a flavoring called Esencia de Cake Mix, which tastes like a cross between vanilla and cherry extracts. "I've tried to find it in the United States," Stamps says, "but I can't, so I just get it by the gallon when I'm in Panama. I think it adds a flavor of home."

The most intriguing difference between the fruitcake commonly made in the Americas and the U.K. version is the baking method. Although the ingredients, proportions and even oven temperature are largely similar, a British fruitcake, which is encased in parchment paper while in the oven, relies on a long, slow bake, sometimes for more than four hours.

That can seem like a mistake when compared with an American or Caribbean recipe, where the baking time generally clocks in at just over an hour.

Listen to the latest songs, only on JioSaavn.com
It's a difference that puzzles bakers on both sides of the pond. "The longer cooking time should give more depth of flavor, possibly due to extra caramelization in the oven," theorizes Burr, while Hamel says that American cakes might have a touch more leavening in the batter, yielding a less dense cake that bakes more quickly than its British counterpart.

Whatever the method, the result for all the accompanying fruitcake recipes is moist, rich and just a little bit buzzy. "I'm not a big cake eater," says Stamps, "but this is the one cake that I'll keep eating, going back for another sliver, until I have to get somebody to hide it from me so I won't eat the whole thing by myself."