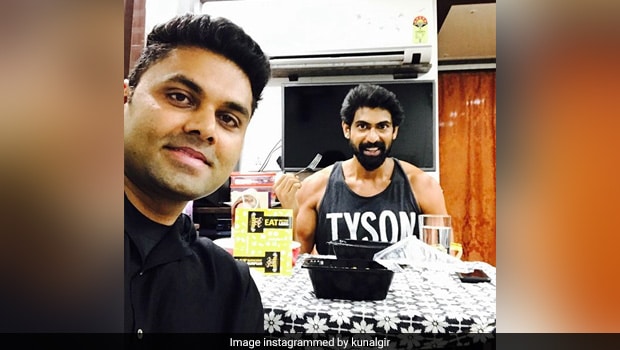 South Indian superstar Rana Dagubatti turns 34 today and the actor is celebrating by releasing the second look of his role as Andhra Pradesh's Chief Minister Chandrababu Naidu. Rana will be playing Naidu in the upcoming biopic of former Andhra CM NT Rama Rao or NTR. The new pictures from the biopic have been trending on the internet, due to Rana Daggubati's uncanny resemblance to a young Chandrababu Naidu. Daggubati, who was seen in a ripped avatar as Bhallal Deva in Baahubali, can put the most ardent health and workout freaks to shame. The actor, who is an astounding six feet three inches tall, had made us all do a double take, when he flaunted his chiseled chest and torso in Baahubali 2. He had hit headlines for his amazing Hulk-like looks and fierce expressions. Dagubatti had worked very hard on his looks for the film and it truly showed.

Rana Daggubati's celebrity fitness trainer Kunal Gir had made sure that the actor transformed for his roles and there wasn't an inch of fat in the wrong places. Here are some diet and fitness secrets from Rana Daggubati, for everyone who wants to cut fat and gain muscles like him.

Daggubati's trainer Kunal Gir had revealed in an Indian Express interview that just exercising is not going to help you lose fat and that workout has to be complemented with a proper diet as well. He advised people to load up on proteins and vegetables, which he said were important for optimal health. He said that milk proteins are also a must. While we may all be familiar with Rana Daggubati as the chiseled hero, not a lot of people know that there's a foodie side to him as well. Daggubati also shares pictures of delicious meals on his social media pages, which makes us believe that underneath that tough and fit exterior, there's a die-hard food fan somewhere.

Here's a look at what goes into giving Daggubati's day a 'good start':

Are you even living if you haven't had a gigantic burger for breakfast at least once in your life? Here's a look at Daggubati's king-sized breakfast at the airport:

Here's what Rana Daggubati's family dinner looks like. "Now you know how I got this big!!!", wrote Daggubati on Instagram:

But despite his occasional binges, Daggubati eats healthy, in order to stay healthy. His breakfast is heavy on carbohydrates from healthy sources like oatmeal with nuts or brown bread with egg whites and vegetables. A typical snack for Rana Daggubati would be a protein shake or some fruit and for lunch, he eats some fish with lots of greens. A typical dinner for Rana Daggubati consists of protein-rich salads, in order to recover from his intense workout sessions.

Well, we wish Daggubati a happy 34th birthday and hope he continues to inspire us to be fitter and better!