Here's Who Made Ranbir Kapoor's Birthday Cake: And No It Wasn't Alia Bhatt! 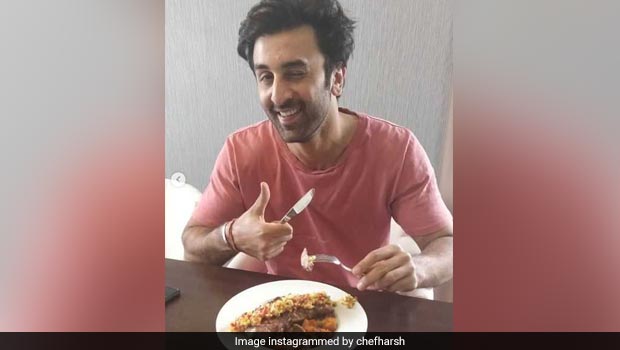 Bollywood actor Ranbir Kapoor, who is fresh off the success of the biopic Sanju and has another promising project Brahmastra, under way, is just celebrated his 36th birthday. Lately the actor has hogged the headlines, because of his rumoured relationship with Brahmastra co-star Alia Bhatt. The two stars have been mum about their alleged affair, but lately it is becoming more and more apparent that the two are together. On Ranbir's birthday, Alia posted a picture of him laughing in blissful oblivion, while sitting at a café on her Instagram page. She captioned the picture 'Happy Birthday sunshine'. The two have also been publicly spotted together in the company of each other's families, giving heat to the belief that the two are seeing each other. Nevertheless, Ranbir Kapoor's absence from all social media platforms is a hindrance for anyone wanting to know the more intimate details about the actor's life.

But yesterday, Chef Harsh Dixit, who has often posted Ranbir Kapoor and Alia Bhatt's meal prep videos and pictures, posted pictures of what Ranbir's birthday meal looked like. And of course, there was a cake involved too! Although it looked like Ranbir Kapoor stuck to eating healthy even on his birthday, the cake, which had come from Pooja Dhingra's Le 15 patisserie.

Doesn't that all chocolate cake look 'supremely' delicious? Enthusiastic fans wished Ranbir Kapoor on his birthday yesterday and the interweb was filled with wishes for the good-looking star. There were some pictures of Alia Bhatt baking a cake as well and some fans immediately conjectured that the cake was meant for her alleged beau Ranbir Kapoor. However, Aliaa herself didn't post any pictures or videos, which could corroborate these rumours. Well, whatever the case, Ranbir Kapoor did in fact have a very foodie birthday. We wish the actor a belated happy 36th birthday and we can't wait to catch him and Aliaa Bhatt in Brahmastra, which releases in 2019.