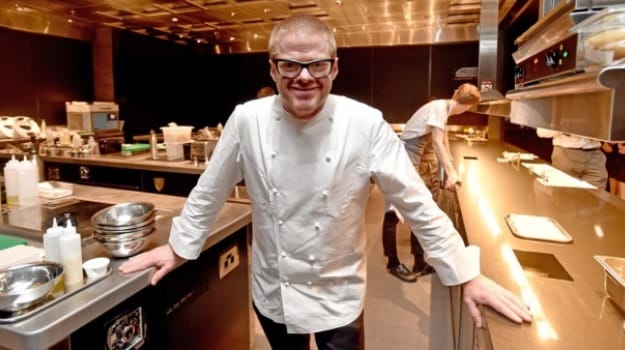 Snail porridge and red cabbage gazpacho among dishes on the $525-a-head set menu that the British chef promises to be 'four hours of pure food theatre'.

Heston Blumenthal's celebrated restaurant the Fat Duck will throw open the doors of its Melbourne incarnation on Tuesday night, with select diners set to be confronted by a giant jigsaw puzzle and guidelines on food photography.

British chef Blumenthal has relocated the Fat Duck to Melbourne's Crown complex for the next six months, offering diners a set menu at $525 a head.

The 15 courses that make up this feast will include snail porridge, red cabbage gazpacho, salmon poached in a liquorice gel and whisky wine gums.

Blumenthal has promised "four hours of pure food theatre" for each of the 14,000 diners who will eat at the Fat Duck during its Australian sojourn. Reservations were allocated for the 50-seat restaurant via an online ballot system that received more than 89,000 entries.

To accompany the food, diners will gaze upon an 8m long, 2m high jigsaw puzzle. The 19,500-piece puzzle, which features a picture of Blumenthal wearing a cape, will be progressively completed throughout the six-month stay in Melbourne.

Faced with such scenes, it's likely diners will be spending much of their time taking pictures via their phones. But the Fat Duck has laid down some ground rules around the food snaps.

A spokeswoman for the restaurant said that while diners are allowed to take photographs, flash photography will be discouraged as well as "guests shifting around the dishes and standing to shoot".