How a Restaurant's Menu Can Trick You Into Spending More Money 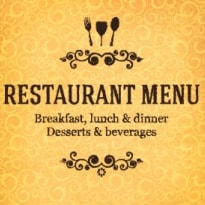 If you've ever ordered the wrong food at a restaurant, blame the menu and not yourself! What you order may have less to do with what you want and more to do with a menu's layout and descriptions, according to a new study published in the International Journal of Hospitality Management.

After analysing 217 menus and the selections of over 300 diners, the Cornell University study showed that when it comes to what you order for dinner, two things matter most: what you see on the menu and how you imagine it will taste. First, any food item that attracts attention (with bold, highlighted or coloured font or set apart in a text box) makes us more likely to order that food item rather than the item listed next to it, researchers said.

"In most cases, these are the least healthy items on the menu," said lead author, Brian Wansink. Second, menu names with descriptive items sell better and lead you to believe that they taste better. The researchers cite a study where they changed the names of restaurant menu items to make them more descriptive; the seafood filet became Succulent Italian Seafood Filet and red beans and rice became Cajun Red Beans and Rice.

Sales of these items went up by 28 per cent and they were rated as tastier, even though the recipe was identical. Diners were also willing to pay an average of 12 per cent more money for a menu item with a descriptive name. Researchers said the best solution to healthier restaurant dining may be an easy one.

"Just ask your server 'What are your two or three lighter entrees that get the most compliments?' or 'What's the best thing on the menu if a person wants a light dinner?'" said Wansink. Wansink and co-author Katie Love point out that restaurants can also use these two tactics - catching attention and priming imagination to guide diners to buy healthier high margin items. It's one way menu design could help make diners slim by design. Comments