How to Cook a Proper Full English Breakfast 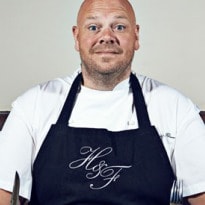 Tom Kerridge treats breakfast as seriously as any dish at his Michelin-starred pub. Here's how he gets the day off to the best start.

When it comes to the most important meal of the day, Tom Kerridge, chef-proprietor at the Hand & Flowers pub in Buckinghamshire, is a traditionalist. "Done properly, the full English breakfast is one of the best dishes in the world," he says.

Kerridge believes the secret is restraint. "If you overkill on a fried breakfast it might ruin your day instead of starting it off brilliantly." Kerridge is devoid of airs and graces and the fry-up is treated as seriously as any main course at his two Michelin-starred pub.

He has worked at classic French restaurants, but when it came to starting out on his own, he went for the kind of place he would choose to visit on his day off.

"I wanted people to know that pubs aren't rubbish, that we can do fantastic food to a really high standard," he says.

Start with the sausages

For me, it's about finding great ingredients and treating them with respect, as if you were building a wall or making a beautiful piece of furniture.

We use breakfast sausages from Walter Rose's in Wiltshire, but any good-quality sausage that isn't too herby will do. It's better to fry them: direct contact with the oil makes the skin go nice and crispy. Turn them so that they brown all the way round. This should take about 10 minutes.

While you're frying the sausages, put the bacon and tomatoes under the grill at a medium heat. Cook the bacon to your own taste - I like mine quite crispy. Turn midway through.

Take care with the tomatoes

The tomatoes take about 12 minutes. Cut them lengthways, face the cut side upwards and sprinkle each half with salt. There's nothing worse than a semi-raw grilled tomato, so make sure they're cooked properly all the way through and a bit caramelised on top.

Braise the mushrooms in stock

Now you start juggling things a bit. While the sausages are cooking and the bacon and tomatoes are under the grill, fry the mushrooms in a separate pan.

At the pub we use big Portobello mushrooms: they have a lovely meaty texture. Peel them, remove the stalks, and fry in a little bit of butter until brown. Turn the mushrooms and braise them in the chicken stock with thyme and garlic. Cook until the stock is reduced, about 10-15 minutes.

Next, fry the black pudding (we use big thick slices of a really good black pudding from Stornoway). You can do this in the same pan as the sausages. Fry until crispy on both sides. This will take 5 minutes or less.

Save the eggs, heat the plates

Always leave the eggs till last, because there's nothing worse than overcooked egg yolk.

While you're making the eggs, keep everything else warm in a low oven, set at about 110C: this takes the stress out of the whole process. Heat the plates too, and put some bread in the toaster.

Cook the eggs to order: poached, scrambled or fried. I would always choose fried. Heat vegetable oil and a little bit of butter in a clean pan and fry the egg to your taste. I like the egg white just set and the yolk still runny.

Arrange it all on the plate and serve with toast - we use Irish soda bread and sourdough - and sauces.

Some people will want tomato ketchup or English mustard, but for me it's all about the brown sauce. Daddies is a little more spicy and vinegary than HP: I'd go for that. And to drink, some freshly squeezed orange juice and a black coffee. That should set you up nicely for the day ahead.

The Hand and Flowers, Marlow, Bucks