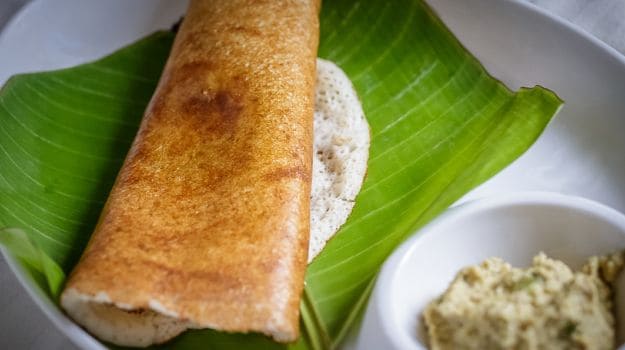 Highlights
When Chef Vijay Nagpal from ITC Hotels returned to Delhi from a ten year stint in Chennai, he was aghast. "What kind of a city is this where you can't get breakfast?" he fulminated. I pointed out that you could, quite easily. And proceeded to enumerate a list of all the cafes that opened early enough in the morning when Eggs Benedict and a croissant would be available for not much more than Rs 500. That made Chef Nagpal absolutely furious. "What?" he roared. "In Chennai, I would send my boy out with a tenner and he'd not only get me a piping hot dosa, he'd give back the change too!"

I had always filed this little exchange in a folder in my memory called "Highly Improbable", but on a recent trip to Mangalore, I ate breakfast every day at a series of eateries, and never repeated the same dish. Each was a gourmet delight and consisted of Buns (actually pooris with mashed banana in them), Sajjige Bajil - a combination of upma with poha, the unlikely named Chowchow Bhath, a meal combo of Upmawith Kesri Bhath, or Mangalore Puttur that was coarsely ground rice flour steamed in a banana leaf. In each case, I got back change from Rs 50, but I did berate the finest breakfast place - inside Ocean Pearl, a branch of our very own Swagath in the NCR - for not serving such a spread up north.

If there was a contest for the best breakfast in the country, there'd be a tough fight to see who would win. Idlis, dosas and the superb chutneys that go along with them never taste as good anywhere outside Tamil Nadu. If you don't believe me, go to Murugan in Chennai. The fragrant Curry Leaf Chutney is at its best in Tamil Nadu - no doubt it has something to do with the soil. Sharing a table at Murugan is a foregone conclusion, as is being politely asked to leave as soon as you have finished. Lingering is not encouraged: Murugan is too much of a nuts and bolts place for all that.

In neighbouring Kerala, Puttu with Kadala Curry is not only supremely hearty, it can be made into a gastronomic experience if the puttu is steamed in the cylindrical container made of bamboo rather than the more common steel. Its origins are no doubt in the times when farmers needed sustenance before setting off for a day's toiling in the fields. In the central belt of Kerala, where much of the tourism is concentrated, the rice used to make idlis yields a springy product; more so than in Tamil Nadu. In addition, the chutney that finds favour in that particular belt, Chamanthi Podi, has, as its base, dark roasted coconut together with spices that are roasted till they are just short of being charred and then ground coarsely. Moistened with pure coconut oil, it is my idea of heaven. The enormous range of bananas that drives others wild with delight leaves me cold: for me, it is coffee and idlis with Chamanthi podi.

(Buy regional spices to spruce up your regular cooking!)

Sticking to the rice belt of the country, Bihar, Orissa and Bengal favour puffed rice and flattened rice in addition to wheat-based breakfast treats, unlike the four southern states where rice rules the roost for all three meals and at breakfast, it rears its head in the form of ground rice, with or without pounded lentils. So, in Kolkata at breakfast time, many mithai-sellers in the city make Kochuri with a strong punch of my favourite spice: asafoetida, with a curried potato that has to be plain enough in order not to detract from the star of the show. There's a certain fastidiousness about quality and favourite places and many a morning have I spent drowsy at being woken up at the crack of dawn to careen across the city to my hostess's favourite spot for the 'best hing'er kochuris in the known universe'. I'm not complaining, mind.

Ghugni, the boiled dried peas with a tempering of cumin in a modicum of gravy, is a favourite any time of the day and I know that any visit to the city will entail at least one trip to some lone fellow with a bucket of ghugni on some railway platform! In rural Bengal, puffed rice sellers come by each and every single day. The matriarch chops onions and green chillies and mixes a tiny quantity of salt and unheated mustard oil, just to flavour the puffed rice.

And these are just a sprinkling of dishes from across these belts. I can lay a bet. The restaurant that can serve a sprinkling of these dishes made in the true manner, will be laughing all the way to the bank.

Promoted
Listen to the latest songs, only on JioSaavn.com
Marryam H Reshii has been writing about food and lifestyle for a quarter of a century! She travels around the country to far-flung tribal villages and long-forgotten corners in search of elusive ingredients, obscure cooking vessels and recipes that are in danger of being supplanted by 'modernity'.