How to Cook the Perfect Chinese Dumplings 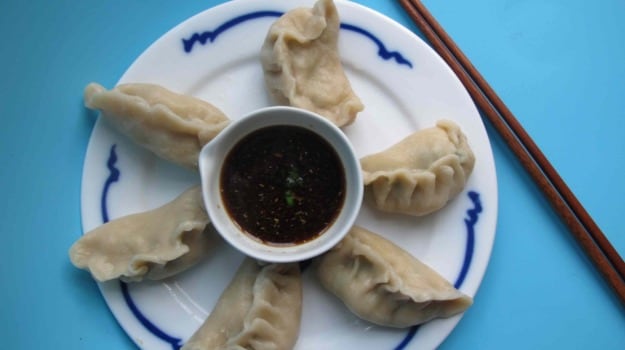 Today is Chinese New Year! What better time to do dumplings? So, with prawns or do you let the pork stand alone? What's the perfect mix of spices? And do you steam, pan-fry or boil for the perfect little parcel?

Happy New Year to the billion-odd people celebrating the Chinese new year. It's the year of the sheep - certainly a more auspicious culinarily proposition than the horse it succeeds, and a good excuse, if any were needed in this dark, damp month, for a bit of a feast. And hurrah for any feast that involves mandatory dumplings - in northern China, you leave them out of the New Year's Eve feast at your peril, because their shape, resembling the ingots once used as currency, brings wealth in the months ahead.

Thursday being New Year's Day, the multitude will already have had their lucky fill of the things, but frankly, I imagine they need no tutelage on the subject in any case. Instead, this piece is dedicated to the novice dumpling cooks - people like me, who'll seize on any excuse to steam a whole fish in the name of abundance, eat their height in noodles in the hope of a long life, and joyfully neglect the cleaning for fear of sweeping away their good fortune for the year. All hail the sheep!

The meat of the matter

The shape of the dumpling is the thing, so in theory, as far as I can tell, you can put anything you like in them, but the most common filling appears to be pork and cabbage, which seems a suitably thrifty choice for a god of wealth. The Serious Eats website specifies "fatty pork" which is good advice - as with any meatballs, you need a bit of lubrication, and the lean mince that's more widely available these days will make your dumplings hard and dry.

That said, I don't think that pork needs to go into the food processor, as Serious Eats and someone called Spicy Little Sister, who obtained a recipe from her Beijing landlord, recommend. Overworking the mixture seems to make it tough, for reasons I'd be interested to discover. Your hands are both better for the job, and easier to clean afterwards.

Spicy Little Sister and the great Ken Hom both put raw prawns into their dumplings, which I'd be hard-pressed to identify among so many other, more powerful ingredients, and food writer Vivian Pei puts dried prawns in her dad's Shandong-style dumplings. I quite like the umami the last supplies, but given the soy and vinegar onslaught that's coming, I'll let the pork stand alone.

Not everyone uses cabbage; Pei says her dad recommends substituting courgette instead, because it doesn't require salting to draw out its moisture, as cabbage does. Perhaps I have a very wet courgette, but mine makes the mixture quite sloppy. It's nice though - a very worthy substitute. Indeed, Fuchsia Dunlop suggests you can use a "vegetable of your choice" and I'd be interested to hear what else people put in there.

The salting has another purpose - it gets the seasoning right into the heart of the filling which means you have less to add later. Despite my prohibition on the food processor for the meat, my lack of patience means it's a better choice for the cabbage, which needs to be pretty finely chopped if you don't want to end up with a mouthful of chewy stalk.

The other thing I'm going to put in there are Chinese chives, as recommended by Dunlop and Pei. Longer and broader than European chives, they have a flavour somewhere between these and wild garlic, and should be easy to spot in oriental supermarkets. If you can't find them, however, wild garlic being thin on the ground at this time of year, I'd recommend using the green parts of spring onions instead. Hom adds black mushrooms, rehydrated. My testers, who, happily, are bigger fungi fans than me, are still not impressed, complaining all they can taste is mushroom.

Thanks to the chives, I don't think my dumplings require Spicy Little Sister's liberal amounts of garlic, but I do like her ginger, which adds a spicy sweetness far superior to the Serious Eats sugar. That sweetness will be balanced by soy sauce, which almost everyone adds to their filling, along with nutty sesame oil and savoury rice wine. Pei also mixes in water and Dunlop chicken stock, presumably to make the fillings juicier, but as an amateur, I find it difficult to seal the dumplings if they're wet, so I'm going to leave the extra liquid out. A little egg, to act as a binder, is helpful though. Spicy Little Sister, whose recipe has a list of ingredients as long as my arm, seasons her fillings with Chinese 5-spice and red pepper powder. As well as being rather daring, I find the 5-spice in particular presents the same problems as Hom's mushrooms; it's just too strong.

Dunlop and Spicy Little Sister allow the possibility that one might like to buy dumpling wrappers, which speeds up the process considerably. I prefer mine a little thicker (which is probably the mark of my coarse and peasanty tastebuds) so, though a number of my guests compliment me specifically on the bought wrappers, I'm going to recommend you give the dough a go at least once.

It really isn't hard work, especially having read the excellent guide to cutting and shaping them on the Meat Loves Salt blog, which supplies clever hints on how to make them round, and how to pleat them (with a link to a very useful video) by food writer Andrea Nguyen, who has written an entire book on Asian dumplings). Mine are still a work in progress, but I'll get there - all tips appreciated.

You can steam, or pan-fry your dumplings (as Hom suggests) but boiling seems to be the most popular method, and the one I prefer. Dumplings, however featherlight your pastry, are satisfyingly heavy things, and to fry them seems overkill. The plainness of a boiled dumpling makes for a more interesting contrast with the flavours of the filling, and the dipping sauces.

On which note, a trio of black rice vinegar, soy sauce and chilli oil, or chilli bean paste are the usual suggestions for dipping your dumplings, though Serious Eats mixes together the soy and vinegar, sweetens them with a little sugar, and adds freshly grated ginger for a spicy, aromatic kick. It takes less than a minute more and with some chilli oil for some heat, is to my mind, the perfect accompaniment to our auspicious little ingots. Happy new lunar year one and all!

(or use about 25 dumpling wrappers - often marked as "gyoza")

55g finely chopped Chinese chives - or spring onions, if unavailable (or wild garlic when in season)

A little oil, to cook

For the dipping sauce

To make the dough, sift the flour into a large mixing bowl. Slowly stir in the water, a little at a time, until you have a firm dough (it shouldn't be wet), then turn out on to a work surface and knead for about five minutes until smooth. Cover with a damp cloth and leave to rest for at least 30 minutes.

Meanwhile, finely chop the cabbage. I find this easiest to do in a food processor, as Chinese cabbage has a very large stem. Put in a colander or sieve over the sink or a large bowl, sprinkle liberally with salt (about 1/4 tsp), and leave to drain for at least 30 minutes.

Put the pork in a bowl and stir in the ginger, soy sauce, wine, sesame oil and egg until well combined. Squeeze out the cabbage thoroughly and add to the bowl along with the chopped chives. Mix thoroughly. Heat a little oil in a small frying pan and fry a pinch of the mixture to check the seasoning - add salt if necessary. At this point you can leave the filling to sit if you like.

Divide the dough into three, and put two bits back under the cloth. Put the remaining piece on a lightly floured surface. Roll it into a sausage about 2.5cm in diameter then cut this into pieces about 2cm long, rolling the sausage a quarter turn towards you after each cut so the piece are slanted in different ways.

Dust the pieces with flour, then squash each flat with your hand. Roll out to about 11cm in diameter and stack between pieces of greaseproof paper.

To shape, hold one circle in a lightly floured hand and put a heaped teaspoon of filling (avoiding too much liquid) in the middle. Make a pleat at two o'clock, as you look at the dumpling, and then bring the opposite side over to the pleat and pinch the two together. Continue in this way down the length of the dumpling until it is well sealed. Put on a floured tray and repeat with the other dumplings, covering each tray with a damp cloth once it's finished.

Bring a large pan of water to the boil. Add a batch of dumplings (just enough to cover the base of the pan), stir once and leave until they rise to the top. Cook for six minutes more, then lift out with a slotted spoon and either keep warm, or (and preferably) serve immediately. While they're cooking, whisk together all the ingredients for the dipping sauce.

What did those of you who celebrated on New Year's Eve eat to bring good luck in the year ahead? And, even if you didn't, which dumplings, Chinese, Italian - even British - would you recommend to bring culinary joy?