How to make meatballs in tomato sauce 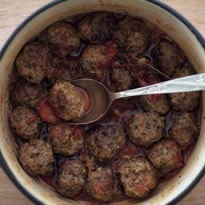 These meatballs are healthier than most sausages, and you can double up the tomato sauce to freeze for future dinners

Meatballs are quick and easy to make, and I would far rather cook these for my children than sausages. Their versatility as bedfellows to a variety of carbohydrates makes them a popular supper for all the family. What's more, you know exactly what goes into them.

Classic flavour combinations are wonderful, from Middle Eastern versions made with lamb and cumin to accompany rice, to the east Asia with pork and ginger, served with noodles, or this version - half pork and half beef mince with thyme and allspice, bathed in a rich tomato sauce.

I use an egg to bind, and also some stale breadcrumbs soaked in milk. It makes the meatballs more porous and able to absorb those herbs and spices. You can also stretch the amount of mince, making it a relatively thrifty supper.

It is worth doubling up the quantities of the tomato sauce. It freezes well and is endlessly useful at teatime: as a quick pasta sauce, homemade baked beans, baked eggs or a base for vegetable soups.

(Makes about 30 meatballs)
For the meatballs

For the tomato sauce

To make the meatballs, soak the breadcrumbs in the milk for 10 minutes.

In a separate bowl, put the mince, thyme, allspice, egg, half a teaspoon of saltand freshly ground pepper.

Add the soaked breadcrumbs to the mince mix and give the whole lot a good squishing. I like to knead the mix in the bowl for couple of minutes to tenderise the meat.

Wet your hands and roll the mince into little balls, about the size of a ping-pong ball. Refrigerate while you make the sauce.

Finely chop the garlic and add it to the olive oil in a heavy-based casserole pan big enough to hold the meatballs in a couple of layers. Let it sizzle for a minute or two over a moderate heat, but don't let it brown.

Add the tin of tomatoes. Season with salt and pepper and add the bay leaves. Bring to a rapid boil, then turn the heat down to a simmer. Cook for 20 minutes, or until the sauce has thickened and the sharpness of the tinned tomatoes has abated. Turn off the heat.

Heat the vegetable oil in a frying pan over a high heat and brown the meatballs in batches. There is no need to cook them all the way through. As you brown the balls, pop them in the pan with the tomato sauce.

Return the tomato sauce to the heat, put a lid on the pan and simmer for about 40 minutes, until the meatballs are cooked.