How to make the perfect coffee and walnut cake 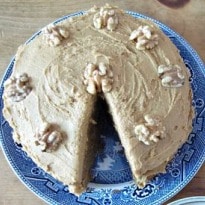 More homely than sophisticated and dainty, this cake could keep you up all night and leave you running back and forth to the fridge for multiple midnight snacks

There are two types of cake in the world: the rich, sophisticated gateaux best eaten in delicate slivers after dinner; and the homely, comforting kind that, if push came to shove, most of us really prefer. The latter are the sort of cakes your granny might have made (if she lived in Ambridge), the ones sold on paper plates wrapped messily in clingfilm at the village fete; in short, the cakes you imagine the sainted Mary Berry probably eats for breakfast.

As you may have guessed, I'm a big fan of this humbler, homelier kind of cake. The feather-light Victoria sponge, the nutty carrot and the sticky fruit cake all have a special place in my heart, but after much soul searching I've come down in favour of the coffee and walnut.

It has got everything: the fluffy butteriness of the Victoria, the crunchy nuts of the carrot and the bittersweetness of a rich, dark fruit cake - all that, and buttercream too. No wonder the infallible Nigel Slater has chosen it as his last meal on earth.

Most classic coffee and walnut recipes use the creaming method also favoured by the Victoria sandwich, among other classics. Slater, for example, reckons the trick to a good coffee and walnut is "simply to beat the butter - sweet, fresh, unsalted - and the sugar so thoroughly that it becomes almost white, even if you are using one of the darker, unrefined caster sugars". This vigorous process helps to get air into the mixture, and thus yields a lighter result. Nigella Lawson, by contrast, uses the all-in-one method which, though it rises impressively, proves denser and moister than Slater's fluffy version.

Lawson's is nothing compared to the monstrously sized coffee cake I make using a recipe by the American cook Ree Drummond, which uses both melted butter and buttermilk to give a squidgy, almost damp result. It's an absolute knockout, and receives rave reviews from my testers at the Guardian, but it isn't the fluffy cake I remember from my childhood.

Nor is the coffee and walnut loaf in Annie Bell's Baking Bible, which uses groundnut oil for a sliceable texture more akin to banana bread than a classic sandwich, or the coffee and walnut torte in Linda Collister's Great British Bake Off showstoppers book, which, with its breadcrumbs and whipped egg whites, is far too delicate for my purposes - a proper after-dinner affair. Creaming it is, then, though I'd prefer a little more volume than I get from Nigel's recipe, so I'm adding some more baking powder, plus a little more liquid to bring the batter to a dropping consistency.

Regular readers won't be surprised to hear I'll be copying Geraldene Holt's Cakes in using soft brown sugar rather than white caster - although soft sugar has a higher moisture content than the more refined variety I don't think that matters in this instance, and the flavour works particularly well with the bitter coffee and walnuts. Neither will eyebrows rise at the news that I won't be including the vanilla essence that she and Drummond add - it's definitely not necessary here. The same goes for the rum in Collister's cake; much as I love rum, it's not one for the tea table. Or, at least, not unless there's a serious crisis afoot.

No, coffee is the backbone of this recipe. One of the things my testers loved about Drummond's very American cake is its bold flavour - where Slater uses 2tsp of instant coffee, she casually pops in 3tbsp, and though it might give granny a heart attack, I'm going to do the same, albeit in proportion to my cake's more modest, British size. Lawson recommends instant espresso powder for this recipe, though she concedes you can substitute granules "if you yourself have a nostalgic longing for muted sweet comfort". Slater disagrees. "I have flavoured cake and frosting with both strong homemade espresso and instant coffee granules, and I have come to the conclusion that the latter gives a richer, more rounded flavour." I, personally, can't detect much difference in the finished article - use whatever you've got to hand.

Lawson also strikes out alone by using ground, rather than chopped walnuts in her cake. I like the idea, but I miss the crunch of the chopped variety, and don't particularly warm to the flavour in the crumb either, which I'd prefer to keep more of coffee. Toasting the chopped nuts, as Collister cleverly suggests, proves an excellent way to bring out their flavour.

The classic choice is buttercream, as deployed by Slater and Lawson. Delia Smith suggests a coffee mousseline, also known as a French buttercream, the tortuous creation of which involves whipping boiling sugar syrup into egg yolks. After three goes, I finally master the art and discover, though it's silky smooth and very buttery, as Slater observes, it lacks "the essential village hall charm" of the original. I come to the same conclusion about most of the other options, including Collister's rum, double cream and mascarpone mixture, and Bell's coffee cream and coffee icing combination - all icing is good icing, but here buttercream can't be bettered. That said, anything we can do, America can do bigger, and I'm sold on Drummond's version with cream. It's easier to spread, and tastes just as good as the original, though I'll be dissolving my coffee granules, rather than leaving them whole. You can have too much of a retro thing.

The perfect coffee and walnut cake

Mix the coffee with 1tbsp boiling water, and then leave to cool. Meanwhile, toast the walnut halves in a dry pan until they smell toasted and nutty, then set a quarter of them aside and roughly chop the remainder.

Beat the butter and sugar together until really light and fluffy.

With the mixer still running, pour in the egg mix very gradually, scraping down the sides of the mixer as necessary. Once incorporated, sift in the flour, baking powder and salt, and gently fold in with a large metal spoon, adding the coffee and chopped walnuts as you go.

The batter should fall, reluctantly, from a spoon; if not, add a little milk to loosen it. Divide between the 2 tins, and bake for about 25 minutes until well risen. Allow to cool for 10 minutes in the tins, then put on a wire rack to cool completely. Meanwhile, mix the 2tbsp coffee for the icing with 1tbsp boiling water and allow to cool.

Once the cakes have cooled, make the icing. Beat the butter until soft, then sift in the sugar and salt and add the cooled coffee and cream. Stir together until evenly combined. Top one cake with a little less than half the icing, spreading it more thickly in a ring around the edge, and then place the other cake on top. Spoon the remaining icing on the top, and arrange the walnuts in a pleasing pattern.

Coffee and walnut, cherry and almond, or plain old Victoria sponge - what would be your desert island cake? And though the sweet fluffiness of the classic coffee and walnut is great for teatime, can anyone recommend a richer, more sophisticated coffee cake to serve after dinner?