How to Make the Perfect Greek Yogurt Dip 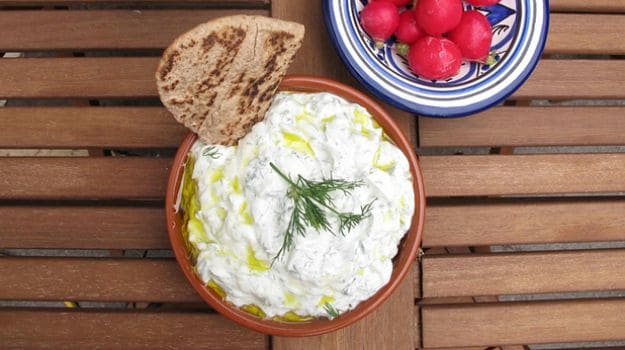 Full-fat yoghurt is at the heart of this classic Greek dip, but the additions are up for grabs: should you dice your cucumber or grate it? Is punchy dill or cooling mint the perfect garnish? And how much garlic is too much?

This classic dip (pronounced zat-zee-key or chat-chee-kee, according to who you listen to) is the Greek variation on a common theme around the Mediterranean and Middle East, or what I like to think of as "the yoghurt zone" " see also Balkan tarator, Turkish cacik and Iranian mast-o-khiar. Familiarity has bred contempt however, and poor old tzatziki has not emerged well from Greece's tourism boom. As Rick Stein puts it, its reputation has been "tarnished by being offered in mass-produced form in every supermarket for consuming with those frightful taco chips for every rinks party from here to Wagga Wagga". Personally, I rather like "taco chips" (though, after a week in Zante as a teenager, I prefer my tzatziki with Pringles), but he's right: bland, watery versions, light on the cucumber and heavy on the cornflour have become the default option in many a dip quartet. Fortunately, it's ridiculously easy to make yourself at home.

Your tzatziki stands and falls on the quality of the yoghurt you use " and it really should be Greek (although, at a pinch, you could use ordinary whole milk yoghurt and strain it yourself). I did have a go using a low-fat variety (the things I do for you lot) but, unsurprisingly, it lacks the rich flavour and creaminess of the real deal. Swap it in if you must, but be in no doubt " your tzatziki will suffer. Bear in mind that even full-fat Greek yoghurt is generally only 10% fat (and the biggest brand in this country, Fage " the renamed Total " is now half that). Sour cream, by contrast, is at least 18%.

Because Fage have reduced the fat content of their yoghurt, and stopped using ewe's milk, purists may want to use a more traditional brand, which can be easily found online. If you have time, I'd certainly recommend straining it, as Rebecca Seal suggests in her book The Islands of Greece, simply to make it even thicker and creamier.

Cucumber is not an ingredient that plays well with others; the high water content has a tendency to leach out into the dish and cause it to separate. There are two things you can do to stop it in its tracks " scoop out and discard the watery middle, as Theodore Kyriakou suggests, or squeeze out the water, as most other recipes do. I prefer the latter option, as it's less wasteful. I'm also going to salt it and leave it to sit in accordance with the recipes in Belinda Harley's lovely book Roast Lamb in the Olive Groves: A Mediterranean Cookbook and Tessa Kiros's Falling Cloudberries. Not only does this help draw out more water, but improves the flavour of the cucumber and keeps it crisp.

Kyriakou, Kiros and Stein all peel their cucumbers, the last two in alternate strips. I rarely bother to peel mine for salads, and I'm not sure why you'd bother here either, especially as the skin contains much of the fibre. Kyriakou is the only one to finely dice, rather than grate, his cucumber. Grating obviously releases more liquid, but it also gives the dish a smoother texture; the version from Real Greek Food, though delicious, feels more like a cucumber salad with yoghurt.

Harley notes that "there are two sorts of tzatziki" and, in Paxos, an island she has been visiting for more than 20 years, "I have heard it described as "hot': it's supposed to ignite your senses, not cool them. Garlic has an assertive, warming role." To that end, her recipe for "Spiro's party tzatziki" uses a whole head of garlic for a kilo of yoghurt, while Kiros uses only two cloves for 600g (though she counsels readers to "use as much garlic as you like").

Marinating the garlic in olive oil as both Harley and Kiros suggest does help rob it of much of its aggression; allowing, as the former explains, "the flavours to infuse and the oil to "cook' the garlic, taking out its bitterness and softening it so that when eating it you do not, as Spiro describes it, come up against "rocks in the road'". Truth be told, I still find it rather overpowering, but when I come back to the dish a couple of days later during a lunchtime fridge forage, I find it has mellowed considerably " all the more reason to allow your tzatziki to sit quietly for a while after making it, as Kyriakou advocates, rather than eating it immediately, as Stein urges. He's also the only person to use spring onions in his tzatziki. They go well with yoghurt and cucumber, but I don't think they add anything " garlic should be the predominant flavour.

The biggest divergence of opinion where this simple recipe is concerned is on the subject of herbs: dill or mint? Harley says, in Paxos, tzatziki "is finished with fresh dill, for astringency; not mint, which tends to be cooling". Seal also comes down in favour of dill, Stein suggests you can use either, while Kyriakou uses dried mint instead of fresh. Personally, I'm not keen on the dried stuff, which I find too strong, and my testers are divided on the fresh herbs " most express an initial preference for fresh mint, on the basis that's what they're used to in supermarket tzatziki, but are surprised to discover they rather like dill too. I conclude the latter gives the dish a more complex savoury flavour, but feel free to use whichever you prefer (though I'd encourage mint fans to give dill a whirl at least once).

Tzatziki generally contains a little acid in the form of white wine vinegar, as used by Stein and Harley, or lemon juice, as deployed by Seal and Kiros. I slightly prefer the vinegar, which has a cleaner sharpness, but don't find a great deal of difference between the two. Everyone uses olive oil too, with Harley sticking in a "water glass full" which, unless hers are thimble sized, is a fairly generous slug. Seal adds a mere tablespoon. Well-drained Greek yoghurt should be creamy enough on its own, but brands vary, so I'd suggest starting with a couple of tablespoons, then adding more to taste if you think it lacks richness. Allow to blend and mellow for a few hours before serving. Preferably with Pringles.

If time allows, put the yoghurt in a sieve suspended above a bowl and leave to drain for a couple of hours. Meanwhile, crush the garlic into the oil with a pinch of salt and leave to infuse.

Coarsely grate the cucumber and put in a colander in the sink. Salt lightly, toss and leave to drain for 30 minutes.

Stir the garlicky oil and vinegar into the yoghurt. Squeeze out the cucumber very well, then stir this in, too. Allow to sit for a couple of hours, but preferably overnight.

Just before serving, season to taste, adding more oil or vinegar if necessary, then finely chop the dill or mint (discarding the tough stems) and stir into the tzatziki.

Tzatziki: a fine way to support the Greek economy, or taramasalata's poor relation? How do you like yours, and what do you serve it with " pitta, Pringles, or paidakia? And will anyone claim that it is better with low-fat yoghurt?