How to Make the Perfect Lemon Meringue Pie 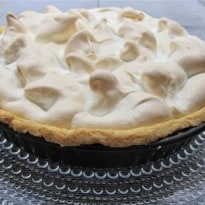 Is lemon meringue pie an ostentatious delight deserving of modernisation, or a retro dessert best left in the past? And which other dated desserts deserve a revival?

If any dish could be described as blowsy, it's the lemon meringue pie; that overblown Dolly of desserts, all sweet bouffant meringue above a core acid enough to put young Jolene right off her game. There's something joyously vulgar about its showy charms, and its brief but brilliant flowering - it won't keep long enough to reward moderation, so gorge yourself before it's gone. Because of this, and because it seems to be something of an endangered species on menus these days (right up there with black forest gateau and île flottante), the LMP is a recipe well worth mastering. After all, who knows when you might be called upon to soothe a broken heart with such sugared succor?

For all the glitz and glamour of the topping, the LMP is built upon good honest shortcrust - though Annie Bell borrows her mum's recipe, using a truly buttery biscuit base, in her Baking Bible. It's delicious, but not strong enough to cope with the voluptuousness above, crumbling into sweet submission around the sides.

In contrast, chef Matthew Tomkinson bakes shortbread foundations for his rather fancy take on the classic pie, which adds a welcome savoury note, but only works with individual versions like his - it's too solid for anything bigger.

Mary Berry and Dan Lepard use a sweet shortcrust enriched with egg and icing sugar, while Cook's Illustrated magazine prefers a plainer, crunchier vegetable shortening and butter variety, which I find a bit puritan. I do, however, very much like their idea of rolling it out over crushed biscuits rather than flour, which helps keep the pastry crisp underneath the custardy filling.

This is what makes or breaks a LMP - the filling must tread a delicate line between balancing the sugary meringue above, and taking the roof off your mouth. Many make the mistake of trying to reconcile the sweet and sour flavours in the curd itself without taking the meringue into account, which renders the whole dessert too sweet.

Bell, for example, uses condensed milk as well as sugar in her retro recipe, sadly softening the lemon's mouth-puckering charms. Lepard's filling proves the most popular with the Guardian's tasting panel - the lemon juice-heavy mixture has a keen sharpness that Tomkinson's, diluted with double cream, or Cook's Illustrated, spiced with sweet vanilla, lack.

Berry's is almost as zingy, but the guinea pigs complain they can taste the cornflour, too - though this is the standard thickener (apart from Tomkinson's gelatine, which, along with the cream, makes his into more of a lemon panna cotta than a curd), excessive amounts result in an odd floury flavour, as well as a slightly jellied texture.

David Lebovitz and Cook's Illustrated both stick butter in as well, which gives their fillings a pleasant richness of flavour. I'm not sure Lepard's orange juice contributes much except colour, however - I prefer the aromatic lemon zest everyone else adds along with the juice.

The topping should be crunchy above, fluffy and marshmallow-like below, which means a fairly brief cooking time. Only Tomkinson uses an Italian meringue, made with hot sugar syrup, and then toasted on top with a blowtorch. It looks good, but lacks the crisp shell that cracks so satisfyingly beneath the spoon in the other pies.

Berry and Cook's Illustrated add a little cornflour to their meringue mixture to stabilise it, which seems to give it more body. I find the latter's vanilla essence distracting, though; the meringue should taste purely sweet in contrast to the sour curd beneath.

Most recipes make the pie all in one go, adding the meringue to the warm filling as soon as it's been poured into the blind-baked pastry shell. Indeed, Cook's Illustrated directs the reader to reheat the filling before combining the two, reasoning that "if the filling is piping hot when the meringue is applied, the underside of the meringue will not undercook; if the oven temperature is relatively low, the top of the meringue won't overcook".

Lepard disagrees, advising me to: "Chill the filled tart fully before covering with meringue. This lessens the topping leaking syrup, caused by steam released from the hot filling dissolving the meringue before it's cooked." Whatever the science, his pie certainly has the best structure of them all, with distinct and satisfying layers of smooth curd and marshmallowy meringue.

This method also has the benefit of allowing you to do all the time-consuming work ahead of time, then simply make and cook the meringue (a 20 minute job) before serving. And if there's anything, apart from a rhinestone catsuit, more likely to wow guests on arrival than the sight of a billowing blond meringue emerging hot from the oven, I'd surely like to see it.

For the pastry, mix the flour, sugar and salt, then rub in the butter (you can do this in a food processor if you prefer) to coarse crumbs. Add the egg yolk and just enough water to bring together into a ball. Flatten, wrap, and chill for 30 minutes. Meanwhile, grease a 20-22cm tart tin with a loose base.

Scatter half the crushed digestives on the work surface and roll out the pastry to about a 5mm thickness on it. Scatter the top with the remaining crushed biscuits, and use to line the tart tin, trimming it neatly so there's still a little standing proud of the top of the tin. Chill for another 30 minutes. Heat the oven to 170C/325F/gas mark four.

Line the tin with greaseproof paper and baking beans or similar, and bake for 20 minutes. Remove the beans and paper, and bake for another 5-7 minutes until the pastry is dry and pale golden. Leave to cool while you make the filling.

Put the lemon juice and zest in a saucepan with the water and whisk in the cornflour until smooth, then stir in the sugar and yolks. Heat gently, stirring, until warm, then add the butter and bring to the boil, still stirring. It should be as thick as custard. Spoon into the tart case and allow to cool completely.

Heat the oven back to 170C. To make the meringue, whisk the whites until soft peaks form. Add the sugar a spoonful at a time, and whisk until the meringue is stiff and shiny. Whisk in the cornflour, then spoon the mixture on to the top of the pie and shape artistically. Bake for 15 minutes until the meringue is golden. Allow to cool before serving.

Lemon meringue pie: the stuff dreams are made of, or all fur coat and no knickers? And which other retro desserts would you like to see revived?