How to make the perfect onion bhajis 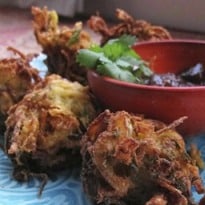 Can another member of the fritter family beat the onion bhaji, do you eat them as a starter or a snack, and what do you serve with them?

The onion bhaji was probably my first introduction to the joys of Indian food back in the late 80s, so I feel I owe this simple snack a considerable debt of thanks. The word "bhajia" means fritter - in fact, they're just one small part of the wider pakora family, which encompasses all manner of good things (goat brain pakora stands out in my memory) fried in chickpea batter, but in Britain, a land never known for its subtle taste, the pungent onion variety rules supreme.

Usually served as a snack in its homeland, generally with a nice cup of chai, bhajis are the stalwart of the starter selection here: a deep-fried appetite whetter for the myriad joys to come. At their best, they're almost ethereally light and addictively crisp. At their worst, they're stodgy and bland - as chef Cyrus Todiwala observes in his new book, Mr Todiwala's Bombay: "What you see in stores and supermarkets does not always represent the bhajia we Indians know." So just how do you guarantee great results?

Often lost in mass-produced versions, the bulk of the bhaji should be onion, rather than dough. Most recipes use yellow onion, sliced very thinly so it cooks through quickly, but food writer Simon Majumdar specifies white and Alfred Prasad, executive chef at the Michelin-starred Tamarind, goes for red. I find white too mild, and although I like the sweetness of the red versions, I miss the yellow onion's pungent flavour, so I'm going to stick with that.

Onions are onions, but where bhaji recipes diverge is in the batter that binds the slices together. Gram, or chickpea flour, is fairly standard, but Prasad and a brilliant little book called Flavours of Gujarat (which has been sitting on my parents' bookshelf for more than 20 years, waiting for this moment) recommend adding rice flour, presumably to make the batter crisper. For me, the difference between a great bhaji and a merely adequate one is in the crunch - as with all deep-fried foods, it should fight back - and Prasad's are particularly fiesty, so I'm going to adopt his 2:1 ratio of gram to rice flour.

Perhaps more important is the liquid used, both in type and quantity. Water is obviously the first choice, but Nikita Gulhane, whose bhaji recipe features in Madhur Jaffrey's Curry Nation, also adds plain yoghurt, and Prasad stirs in a little melted butter. I like the rich tanginess of Gulhane's yoghurt, but I find it makes the batter a bit thick and gloopy, so I'm going to use Prasad's butter, plus Todiwala's lemon juice for flavour.

The batters vary enormously in consistency: Gulhane's is a thick paste, while Majumdar counsels aiming for the texture of double cream. This makes all the difference to the finished result: the two thickest batters, from Gulhane and Flavours of Gujarat, produce rather doughy bhajis that seem to be more about the batter than the onion. They're tasty enough, but I prefer the more delicate coating of Todiwala, Prasad and Majumdar's versions. The guiding principle is that it should be thick enough to cling to the onion, but not firm enough to form clumps of its own.

Majumdar suggests letting the batter rest for an hour before use, much like a yorkshire pudding, presumably to allow the flours to absorb the moisture in the batter. I don't think this is desirable here, though: his coating is tough, but not particularly crisp, and one taster likens it (approvingly, I must add) to a Woolworths onion ring.

The gram flour gives the batter a subtle nutty flavour, but subtle isn't what we're looking for here. Chillies are a popular addition, with Prasad and Todiwala plumping for fresh green chillies, and Prasad, Todiwala, Majumdar and Flavours of Gujarat sticking in dried chilli powder too. I prefer the cleaner, greener flavour of the fresh variety. Turmeric is also fairly standard, as much for colour as flavour.

Gulhane and Prasad both add garlic and ginger to the batter, which lend it a pleasing and more interesting sweetness than Majumdar's sugar - as do Prasad's unusual, but very welcome, fennel seeds, which I prefer to Todiwala's sharper ajwain, or lovage seeds. I love the earthiness of his cumin seeds with the onion, though. Sesame seeds, as used in Flavours of Gujarat, seem an unnecessary addition.

Fresh coriander, used by everyone but Majumdar, adds an attractive colour and a fresh, clean flavour to the batter, while curry leaves, as used by Prasad and Gulhane, contribute a herbal note. They're only worth buying fresh though, so if you can't find them, leave them out.

It is very important to get the temperature of the oil right, as Todiwala explains: "Too hot [and] they will fry too fast and remain raw inside and gooey. Too cold and the results will be oily and soft." The fairly standard 180C seems about right - most recipes suggest dropping a piece of batter in there to test the heat, but if you do have a food thermometer, use it - it is far more reliable than the sizzle test if you're after perfect results.

Sift the flours into a mixing bowl, then stir in the ghee and lemon juice and just enough cold water to bring it to the consistency of double cream. Stir in the spices, aromatics and herbs and add salt to taste. Stir in the onions so they are well coated.

Heat the oil in a deep-fat fryer to 180C, or fill a large pan a third full with oil and heat - a drop of batter should sizzle as it hits the oil, then float. Meanwhile, put a bowl of cold water next to the hob, and a plate lined with kitchen paper. Put the oven on a low heat.

Once the oil is up to temperature, wet your hands and shape tablespoon-sized amounts of the mixture into balls. Drop into the oil, being careful not to overcrowd the pan, then stir carefully to stop them sticking. Cook for about four minutes, turning occasionally, until crisp and golden, then drain on the paper and put in the oven to keep warm while you cook the next batch. Serve with chutney or pickle.

Bhajis - where do you stand: a great curry house starter, or a fabulous teatime treat? Which other members of the pakora family do you rate - and what do you like to serve with them? (For me, aubergine pickle takes some bettering.)