It's Roasted Veg, But Not As We Know It 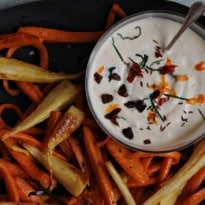 Roasted vegetables can be deeply satisfying, and so much more than bog-standard student nosh. Find our revelatory tips here...

If you type "roast vegetables" into Google Images, you will see hundreds of amazingly similar photographs of the same dish: peppers, carrots, onions and whatever else the cook had to hand, chopped up and tossed in oil and roasted until soft with a few burnt bits around the outside. This is the dish that launched a thousand student cooking careers.

There's nothing wrong with this - my wife Mima points out that, at university, she used to stir goat's cheese into the mix, prompting gasps of admiration from her guests - but the roasted vegetable has so much more to offer.

My collaborator on this column, Jane Baxter, is arguably the country's greatest vegetable cook. She used to run a restaurant in the middle of a field on Riverford Farm in Devon, where the menu consisted almost entirely of vegetable dishes. Chefs from around the country went on pilgrimages to Riverford to taste her creations. She was the cabbage queen, the empress of endives, the Buddha of bok choi.

I once asked her why her vegetables tasted so much better than anyone else's. She replied that she had one basic principle: never boil (or even steam) a vegetable*. Roasting them instead enhances and intensifies their natural flavour, causing the natural sugars to caramelise and giving a crisp outside and a soft centre. This doesn't just apply to the obvious roots, but to vegetables that you might never have dreamed of roasting, such as leafy greens, cabbage, broccoli or cauliflower.

Roasting a cabbage (see tips below) is truly a revelation. It turns a wholesome but tiring vegetable into a one-tray supper of kings. Only last night, my wife and I ate a whole Savoy cabbage the size of my head, roasted with butter and olive oil and topped with grated cheese. It was as cheap and simple as any student supper - and gratifyingly original.

*Jane makes the odd exception for peas, any beans that are green and new potatoes.

• Most vegetables can be peeled, chopped and roasted from scratch in a little oil, salt and pepper. Ideal temperature: about 170C/335F/gas mark 3½. They will take from 20 minutes to an hour to cook depending on your oven, and the size and type of veg. For "wetter" veg - such as peppers - turn the temperature up 20-30C.

• Check your veg and toss them around every 10 minutes . This will ensure nice, even browning. There is generally a hot part of the oven where they will otherwise catch or burn.

• Try cutting your roots into different shapes. Carrots and parsnips can be cut lengthways into wedges or, if they are smallish, cut in half on the diagonal.

• Coat your veg in a bowl with the fat you are cooking them in, be it melted butter or oil. Toss them with your hands and season well before tipping them on to a baking tray.

• Vegetables shrink when you roast them, as the moisture comes out, so always cook a little more than you think you will need. Any leftovers can be reheated or used as the base for a hearty soup. But be careful: piling the tray too high will make the cooking harder to control and you will end up with something resembling those Google images. If you are cooking large amounts, split them into two trays.

• Root vegetables all take different times to cook. This will also depend on how you have cut them. Until you have developed a feel for this, try cooking the vegetables separately and combining them when they are done.

• Combine roasted vegetables with ones cooked in other ways - for example braised (oven-baked in stock) or grilled - to bring other textures and flavours to a finished dish.

• Roasted vegetables don't have to be served hot, straight from the oven: you can dress them and serve at room temperature, or cold in salads (below).

• Tinned pulses - chickpeas, flageolet, butter beans and so on - can be added to any roasted vegetable before the end of cooking to turn them into a light supper.

•Beetroot: peel, cut into wedges and toss in olive oil then roast. Cover with foil to prevent drying out. Also try roasting them in their skins with a little oil and water in a covered dish. When cooked, the skins should slip off easily; cut the warm beets into chunks and dress with balsamic vinegar, honey and orange juice.

•Potatoes: parboil potato wedges, drain and shake in a colander. Season and sprinkle with a little semolina flour. Tip into a tray with hot oil and squeeze over a good dollop of Marmite. Toss together and roast as per usual.

•Cabbage: cut into chunks and toss in melted butter, olive oil, salt and pepper. Put into a roasting pan with a little water and roast at 200C/400F/gas mark 6 under foil for 20-40 minutes. Grate cheese on before serving.

•Parsnips: mix a little melted butter, maple syrup and mustard in a large bowl. Cut the parsnips into batons and coat them in the mix before roasting.

•Squash: roast in chunks in a little olive oil. When almost cooked, remove from the oven and toss in a mixture of finely chopped garlic, red chilli and rosemary. Return to the oven for another 10 minutes before serving.

•Turnips and swede: cook in beef (or lamb) dripping with lots of black pepper.

•Jerusalem artichokes (AKA duvet lifters): roast whole, or slice and cook "in a bag": toss them with mushrooms, garlic, leeks and thyme. Place the veg mix in a baking parchment bag, add a little white wine and butter and seal. Bake for about 30 mins in a hot oven (ie, above 200C/400F/gas mark 6). Serve with goat's cheese and drizzle with good-quality olive oil - or truffle oil if you have it.

•Cauliflower: this cooking method will change your view of cauliflower forever. Roast florets tossed in olive oil in your hottest oven for about 30 minutes so they have brown crispy bits on the outside. You can sprinkle them with turmeric before to give them a lovely yellow colour.

And finally a couple of dressings to go with your roast veg:

1 Blend all the ingredients until smooth.

Yoghurt and date dressing for roast carrots and parsnips

1 Mix all the ingredients together. Drizzle over the veg and sprinkle with pomegranate seeds.

Top Photo: Add an extra dimension to your roasted veg by serving them with a sweet yoghurt and date dressing. Photograph: Jill Mead for The Guardian