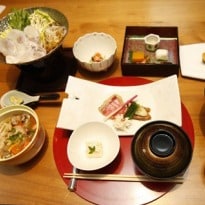 The United Nations cultural organization has added traditional Japanese food to its cultural heritage list, making it only the second national cuisine to receive the prized designation.

A UNESCO committee announced the decision Wednesday at a meeting in Azerbaijan.

Previously only French cooking had been distinguished as a national culinary tradition. UNESCO has also recognized specific dishes from Mexico and Turkey, and added the Mediterranean diet -- the tradition of sharing food and eating together -- at this week's meeting.

Known as "washoku," Japan's traditional cooking embraces seasonal ingredients, a unique taste and a style of eating steeped in centuries of tradition.

Japan hopes that UNESCO recognition will both send a global message and boost efforts to save washoku at home.

Masanori Aoyagi, the commissioner of Japan's Cultural Affairs Agency, told the UNESCO committee that washoku gives Japanese a feeling of social cohesion. He said that it's low-calorie and healthy, but quipped that it doesn't work in his case, because "I take always double portions."