Ramen Mask: A Japanese artist, Takahiro Shibata, has created a three-dimensional mask which is made to look just like a bowl of ramen. 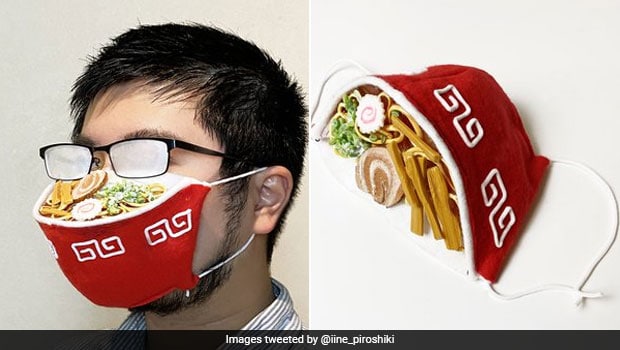 Ramen mask: This Japanese artist found a unique solution to a pertinent problem.

The Coronavirus pandemic has brought about a drastic change in the way we function. Earlier, we could not venture out of the home without our phones and wallets, and now masks and sanitisers have become equally necessary. While masks do play an important role in protecting us from infections, one of the key issues that many people face while wearing them is that their spectacles tend to fog up. A Japanese artist, Takahiro Shibata, has found an interesting solution to this problem.

Shibata has created a three-dimensional mask which is made to look just like a bowl of ramen. So every time his spectacles fog up, the bowl of Ramen appears to be hotter and steamier. The mask is made of clay and felt, and has intricate details on the bowl of ramen. We can see braised pork, green onions, bamboo shoots, and a slice of fish cake detailed on the mask made by Shibata. How creative, right?

(Also Read: These 'Mask Parottas' From Madurai Are Going Viral For All The Right Reasons)

On being asked about the inspiration behind the mask, Shibata said that it stemmed from personal experience. He had initially tried to solve the problem of spectacles fogging up while wearing a mask. But when he figured out that it was easier said than done, he decided to use the condensation process to his advantage. As for selling the mask, Shibata says that he has no plans to sell the mask and it's intended only to 'cheer people up a little bit'. Further, the mask is quite heavy as he reveals it is stuffed with cotton. "The 'bowl' is filled with cotton and it weighs almost as heavy as a stuffed toy," he said. "So it doesn't feel comfortable when I put it on."

Maybe he could figure out a way to make it lighter in the future. The funky looking mask would definitely bring a sigh of relief to many spectacle wearers around the world. However, full marks to the artist for the ingenious idea! What did you think of the mask? Tell us in the comments below!