Karva Chauth 2014: This Time, Men Are Fasting Too! 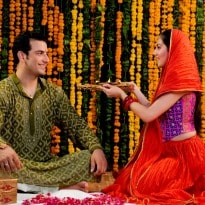 Karva Chauth is being celebrated across the country not just by women, but even men. Actor Varun Badola being the first case in point. Even though his wife does not fast on Karva Chauth, Varun's decided to take on the challenge. He's going to do without food and water for the entire day purely out of curiousity for the festival.

There are others participating in the trend: Celebrities like Chetan Bhagat, Jay Bhanushali and Hiten Tejwani. They've also pledged their support to #FastForHer, an interesting social initiative by the online matrimony website Shaadi.com.

On Karva Chauth, most married women keep a fast from dawn to dusk (till the moon rises) for their husband's long life. But now, the idea seems to have caught up with young urban men. They believe it isn't important for their wives to observe the fast. They also don't mind fasting themselves for their beautiful wives. (More: Karva Chauth - What to eat before and after your fast)

"Well, I found this #FastForHer as a cute initiative, and I see it has grown in popularity. I also wanted to see how difficult it is to observe the fast. So, it's also out of curiosity that I'm doing it for the first time."

He added, "It's not a compulsion in our family, and personally, I believe it's not very sensible for a working professional to observe a fast where you can't even drink water. But let's see, I'm giving it a shot this time."

Here's what Hiten Tejwani, who's married to actress Gauri Pradhan had to say:

"Gauri knows I can't stay hungry, so it's a challenge for me to observe this fast. Women have been fasting for so long now. Let's change it. And it's totally up to Gauri whether she wants to fast or not. If she's not keen on it, then it's totally fine."

Different men have different reasons for why they want to fast for their wife. Among the single men, who consider it's okay to fast for their wife, 'equality in marriage' takes precedence over everything else as a prospective reason. Keshav Arora, 27 who's getting married early next year was asked if he would keep a fast and this is what he had to say-

"I doubt it! Not eating is fine, but not being able to have water is definitely too much. But I would never ask my would-be wife to fast either."

CommentsSo, are you fasting for your lady love?