Light Drinking Not As Healthy As You May Think 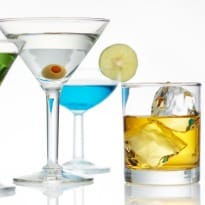 A glass or two of booze is good for your heart, according to long-standing medical advice that drinkers are often fond of citing. (More: People who drink alcohol live longer.) But, according to a study, this cherished invitation to say "cheers" is well off the mark. Reducing even light consumption of alcohol will not only improve your chances against coronary heart disease, but also help you lose weight and ease high blood pressure, it said.

Writing in the British Medical Journal, researchers carried out an overview of 50 published studies into the drinking habits and health of more than 260,000 people of European descent. They looked especially at those with a key variant of a gene called ADH1B.

Previous research has found that a single change in the DNA code in this gene makes people less sensitive to drink, and thus less at risk from alcoholism. The new study discovered that individuals with the variant drank 17 percent fewer units of alcohol per week and were 78-percent less likely to binge-drink than those without it. They also had a 10-percent lower risk of coronary heart disease and enjoyed lower systolic blood pressure and body mass index (BMI).

"This suggests that reduction of alcohol consumption, even for light to moderate drinkers, is beneficial for cardiovascular health," the study contended. Juan Casas, a professor of epidemiology at the London School of Hygiene and Tropical Medicine, who led the probe, said a decades-long belief in health benefits from light-to-moderate drinking may have been flawed. "We now have evidence that some of these studies suffer from limitations that may affect the validity of their findings," he said in a press release. "In our study, we saw a link between a reduced consumption of alcohol and improved cardiovascular health, regardless of whether the individual was a light, moderate or heavy drinker. "Assuming the association is causal, it appears that even if you're a light drinker, reducing your alcohol consumption could be beneficial for your heart."

Independent commentators said the study was interesting, not least because it challenged what is now almost a dogma. But, they cautioned, the debate was far from over. They noted the study was based only a statistical approach - it was not designed to explore exactly why those with the ADH1B variant were healthier. There could be causes that apply only to them, and not people without the variant, which makes general advice on drinking a risky business.

"People with genes for alcohol intolerance may... have other unmeasured behaviours or traits that reduce heart disease," Tim Spector, a professor of genetic epidemiology at King's College London, told Britain's Science Media Centre. "A good example might be if they also had different gut microbes which prevented heart disease."

(More: Even One Night of Heavy Drinking is Harmful)