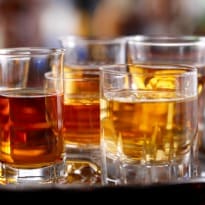 Limited-edition offerings have become commonplace as whiskey makers dabble in new flavors to lure customers. But the latest introduction by Michter's Distillery LLC breaks into a pricing stratosphere that could reverberate across the industry.

"This is kind of new territory," said industry observer F. Paul Pacult, editor of the newsletter Spirit Journal. "It's going to start a whole rush of interest in very high-end bourbons, American whiskeys and American spirits."

Michter's Celebration Sour Mash Whiskey will reach shelves Monday in select liquor stores, restaurants, bars or hotels in such places as New York, Los Angeles and San Francisco. The company produced just 273 bottles of the blend of whiskeys, some aged up to 30 years.

Christian Navarro, president of Wally's Wine & Spirits in Los Angeles, plans to sell the product for $3,600 per bottle, more than he paid for his first car.

He had at least five takers for each of his bottles, with movie stars and rock singers among those competing for the limited supply, he said.

Typically, prices for limited-edition American whiskeys top out at a few hundred dollars per bottle.

Select single-malt Scotches, cognacs and brandies aged for decades can bring tens of thousands of dollars per bottle.

"Up until just about 10 or 12 years ago, American distilling was looked upon as kind of the idiot stepchild of Ireland and Scotland and France," he said. "But now we're seeing that's not the case at all. Perhaps the most exciting innovations are now being made" in the U.S.

Promoted
Listen to the latest songs, only on JioSaavn.com
Stocks of 20- or 30-year-old American whiskeys are extremely limited, as larger whiskey makers typically tap into their barrels much sooner to try to keep up with demand.