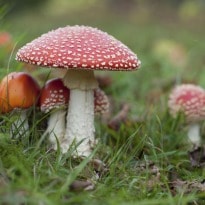 Hallucinogenic mushrooms, commonly referred to as magic mushrooms, have been found growing on the grounds of Buckingham Palace. This variety of mushrooms helps in the growth and development of certain trees, but can be poisonous for humans.

The species of Amanita muscaria was discovered by well known British horticulturalist and TV personality Alan Titchmarsh while presenting a programme on the palace gardens that will be broadcasted on Christmas Day. He came across these mushrooms while touring the gardens with Professor Mick Crawley, an ecology expert. The discovery was recorded for the ITV show, 'The Queen's Garden'.

These mushrooms are eaten in some cultures for their hallucinogenic effects. They are also known as fly agaric, fly mushrooms or psychedelic mushrooms. Since ancient times they have been used in Central America for religious ceremonies. But they can also make people really sick. They contain an ingredient called psilocybin which has mind-altering effects. This may result in euphoria and hallucinations.The side effects may include nausea and panic attacks. A study conducted by Johns Hopkins University throws the spotlight on the spiritual effects of psilocybin.

There are only three European countries where the possession and cultivation of magic mushroom is legal. These are Bulgaria, Czech Republic and Spain. These mushrooms are easily recognizable being red in colour with white spots. You can usually find them growing under birch and pine trees. A Buckingham Palace spokesperson revealed that there are several hundred fungi species in the gardens, but they are not used in the palace kitchens to avoid any sort of confusion. CommentsWith inputs from PTI