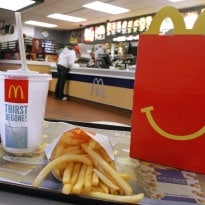 McDonald's is mixing up its menu with healthier, fresher sounding items such as its chicken McWraps but not enough customers are biting.

The world's biggest hamburger chain on Monday reported a second-quarter profit that rose 4 percent but fell short of Wall Street expectations. It also said July sales are expected to be relatively flat and warned of a tough year ahead, given the heightened competition and rough economic conditions around the world.

"We don't have as much pricing power," said CEO Don Thompson, noting that the company wouldn't be able to easily charge more for its food without the risk of scaring off customers.

The company said sales were down 0.1 percent in Europe. Results in Germany and France dragged down its stronger performance in the United Kingdom and Russia.

The company, which has more than 34,000 locations worldwide, says global sales edged up 1 percent at restaurants open at least a year. The figure rose by the same amount in the U.S., where McDonald's has been touting its Dollar Menu while also trying to adapt to changing eating habits with items such as its veggie-filled chicken wraps and egg-white breakfast sandwiches.

But the small sales bump in the U.S. wasn't enough to offset the higher advertising and promotional costs for those new items, as well as the reduced efficiency in restaurants. Operating margin declined slightly as a result."We threw a lot of new products at restaurants this quarter," Chief Financial Officer Pete Bensen said in a call with analysts. "So our efficiency per crew hour was down a little bit."

The tepid sales growth for the quarter ended June 30 reflects the challenges facing McDonald's Corp., which for years had been a standout in the fast-food industry. Part of the problem is that economic conditions remain weak in many regions of the world, with the company repeatedly noting that people are being more careful about eating out. That's true in Europe and the region encompassing Asia, the Middle East and Africa, the company said, with both posting slight declines in sales at restaurants open at least a year.

But another challenge for McDonald's is the growing number of chains that offer quick, better quality food at higher prices, including Chipotle, Noodles & Company, Panera Bread and others. Those chains are reshaping expectations when people go out to eat.

Traditional fast-food chains have taken note and are scrambling to keep pace. Wendy's, which reports its results Tuesday, is in the process of renovating its restaurants to be more inviting and modern. Its new burgers are positioned as premium, and the chain has been making tweaks such as introducing natural-cut French fries and softening the edges of its famously square burgers so they don't look so processed.

Even KFC, which is owned by Yum Brands Inc., is opening a test restaurant that has a more upscale design and menu next month. To raise its own image, McDonald's has been revamping its restaurants with a sleeker design as well. It's also making tweaks to existing items, such as replacing the bacon in its wraps and burgers with a thicker, applewood-smoked variety.

But whether Thompson, who took over last summer, will be able to keep McDonald's image up to date as it struggles though the tough economic climate remains to be seen. In the previous quarter, McDonald's reported its first global quarterly sales decline at restaurants open at least a year.

On Monday, the company trimmed its estimate for new restaurant openings to reduce its capital expenditures. It now expects to open between 1,500 and 1,550 net new locations globally, down from its previous forecast of 1,500 to 1,600.

Despite the challenges, Thompson repeatedly expressed confidence that McDonald's would be able to grow over the long term.

"One thing we've never done at McDonald's, we don't cry or whine about market conditions" he said.

Earnings were short of the $1.40 analysts expected.

Revenue rose to $7.08 billion, in line with expectations, according to FactSet.