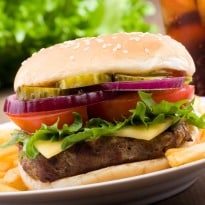 McDonald's Corp is getting back to basics after a string of disappointing quarterly results in its home market of the United States, which accounts for 30 percent of overall revenue.

The fast-food giant has reported roughly two years of turbulent sales at established U.S. restaurants due to sluggish economic growth, stiffer competition and internal missteps that have complicated menus and slowed service.

Adding to the pressure, higher costs for beef, chicken and labour are squeezing profits because customers are cutting back on visits as McDonald's raises prices to offset the additional expenses.

Chief Executive Don Thompson said on Tuesday that McDonald's is launching a "reset initiative" in the United States that would include tweaking staffing to improve speed during peak hours and putting more focus on affordability and core menu items, such as the Big Mac, Egg McMuffin and french fries. These core items account for 40 percent of sales.

The CEO, who took the helm at the Golden Arches in July 2012, urged investors to be patient. "This is not about a silver bullet. It is important to underscore that it will take time for consumers to notice the changes and reward us with increased visits," Thompson said on a conference call with analysts.

Sales at U.S. restaurants open at least 13 months fell a steeper than expected 1.7 percent in the first quarter. McDonald's prices were up 3 percent during the quarter and traffic fell, suggesting push-back from diners.

The lacklustre results from McDonald's landed a few days after Chipotle Mexican Grill Inc, the popular burrito chain it spun off in 2006, said its first-quarter same-restaurant sales jumped 13.4 percent.

Chipotle caters to a wealthier consumer than McDonald's and it serves on-trend food, including dishes made with organic produce and antibiotic-free meats. It is planning to begin raising prices at the end of this quarter to offset higher costs.


No relief in sight

This year promises to remain challenging for McDonald's as it grapples with record-high beef prices, labour cost increases, image-denting protests from its minimum-wage workers and aggressive competition from rivals that include Burger King Worldwide Inc, Wendy's Co and Yum Brands' , Taco Bell as well as privately held chains such as In-N-Out Burger and Five Guys Burgers and Fries.

First-quarter commodity costs in the United States were up roughly 3 percent, primarily due to higher protein costs. "We expect similar pressure in second quarter then easing throughout the second half of the year," Chief Financial Officer Pete Bensen said. Wall Street analysts agreed that a U.S. turnaround will be slow in coming.

"We continue to view McDonald's domestic business as hampered by a menu with far too many items on it, which is slowing average service times," Janney Capital Markets analyst Mark Kalinowski said in a research note.

Elsewhere, McDonald's fared better. Same-restaurant sales in Europe, its top market, which contributes around 40 percent of overall sales, were up 1.4 percent, slightly better than analysts' forecast for a 1.2 percent gain.

Promoted
Listen to the latest songs, only on JioSaavn.com
In the Asia Pacific, the Middle East and Africa (APMEA) region, same-restaurant sales rose 0.8 percent, compared with analyst projections for a 0.5 percent increase.