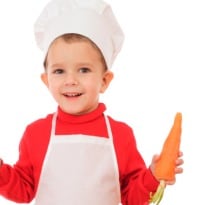 Mummies no longer have to coax their little girls into the kitchen, thanks largely to shows like Junior Master Chef Australia. Anjana Vaswani meets the spellbound girls and boys who can't wait to slip on their aprons and get cracking, as whisks emerge as magic wands and adults realize that there are a lot of kids who love to cook

It's a day of darkness and gloom; a day of thick clouds and deep blackness. Suddenly, like dawn spreading across the mountains, a great and mighty army appears...well, it's really just two smiley, happy little kids armed with spatulas, scoops and kitchen scales, but they brighten up the Haryanawalla residence alright.  DY Patil International School student and mini-chef Dua is all smiles, but she's a little reserved at first. Before she's had a chance to settle down beside us, her brother, 7 year-old Ali, on the other hand, has hopped across the apartment, pulled a sheet off an electronic organ, commanded his sister to play something, introduced us to the family's lovebirds and pretty much presented his views on everything that's going on in the world.

We ask him if he cooks as well. "Ali...eats," smiles Arwa, mother of the two, as she ruffles his dark hair. Then, nudged by a tiny elbow, she adds, "He helps though. He loves to blend things, he peels garlic...." Dua giggles. She traces her own fondness for cooking back to when their family resided in San Jose, California (they moved here just three years ago). "When I was small," starts the 11 year-old, in all seriousness, "my father and I would make pancakes on Sundays and then, one day, we decided to experiment with our pancakes. So, we started making savoury versions, and throwing in vegetables."  Daddy, Murtuza, who's an entrepreneur and angel investor (he guides and mentors start-up companies to find funding and to scale-up operations, etc), also loves experimenting with mukhwas, so Dua and her father frequently make their own versions of the after-dinner mouth freshener.

Now, Dua is completely in her element. When her mother interjects with a little trivia about how schools in the US conduct regular health tests to see if children are eating right, Dua begs to take over the conversation. There's so much she wants to tell us, like how the school's emphasis on healthy diets led her to create home-made ice-creams, "by freezing pureed fruits mixed with just a little honey." She has a new idea she hasn't tried out yet, but wants to soon. "I want to make a guava ice-cream and, just like they serve the sliced fruit on the roads here, I want to include chillies and rock salt in the recipe."

We ask her what she plans to prepare for us today, and she folds her arms across her chest and instantly replies, "Umm...first let me ask you...What would you like to eat?" When we assure her we're happy to let her decide, she suggests, "Mango Quesadillas." Stuffed with cubed, tandoori-style chicken and a lip-smacking masala-mango pulp, the delicious recipe is also her own concoction. We're not surprised to learn that Dua loves MasterChef Australia, "especially the Junior MasterChef series," she says, telling us she'd love to participate in the challenge that requires you to pick your own ingredients and then race against the clock to create something interesting, and, "completely your own."

To learn more than cooking
In that aspiration, Dua is joined by scores of Mumbai kids, who are now flocking to "real," hands-on cooking classes (as opposed to the old-school, keep-your-kids-busy-for-an-hour classes), eager to learn, not just how to cook, but how to create. Chef Christina Fernandes, part of the team at Le Cordon Bleu-trained Chef Pooja Dhingra's Le 15 Patisserie, has been conducting classes like these for over 2 years now (Rs 2,000 onwards for a 3-hour long workshop for kids aged 6 to 11 years). "When we teach kids how to make pizzas, they must even make the dough and the sauce from scratch," Fernandes tells us, explaining that customized classes for kids aged 6 to 11 are also immensely popular. "Cooking, and activities like moulding edible gum-paste into cake ornaments like flowers refines motor skills and boosts hand-eye coordination," she opines, though she knows that's not what draws the kids here. "Fun" -- that's the bottom-line, she admits.

Australia-based chef Ajoy Joshi, who actually took to teaching kids Indian cooking on the insistence of his son Aniruddh, can think of many other benefits. "Cooking teaches focus and concentration," he says, adding, "As kids grow up, being involved in the kitchen teaches them organization and cleanliness. Besides, they learn how to follow instructions, and cooking with family and friends is great to teach kids about teamwork, patience, perseverance and problem-solving."  Joshi also believes that kids learn resilience, "as your recipe won't turn out perfect every time. So you learn to try again. Most importantly though, cooking teaches you how to appreciate the effort that goes into a project, not just to focus on the result." Farzana Sheikh, who teaches kids aged 9 and above Italian cooking (Rs 3,000 onwards for 5 to 6 day workshops where each session is 3 hours long) at her Yari Road residence in Andheri (W), has also noticed, "Initially, kids want to learn to prepare foods they like, like pizzas and pastas, but their interest grows with successive classes and then they want to learn how to make dishes they've seen prepared on TV or dishes they've sampled at restaurants." Sheikh therefore believes cooking classes translate into healthy eating over time, as kids grow interested in food, "and curious about different kinds of meat and vegetables."

Too young to cook?
The culinary curiosity of Worli resident Lubaina Bandukwala's daughters, Samina (6) and Khadija (9) was whetted by the Junior MasterChef series that aired on TV this summer, the girls tell us, and Bandukwala adds, "Now everything from play-dough to cooking turns into a mini Master Chef session at home." On her way to speech and drama class, Samina eagerly tells us about the milk cakes she loves to prepare (and eat, she doesn't mind admitting) and speaking of her newborn love for cooking, Khadija says, "I make my own scrambled eggs everyday now and sometimes, I use my mother's recipe to make fried noodles with chicken." But Khadija admits her mother supervises everything. "My mother turns on the gas but then I do everything else,"
she says. Joshi, who trained in Chennai and has set up Nilgiri's, a thriving restaurant in Sydney (whose name has been bestowed to his kids cooking classes too), doesn't think six is too young to cook. In fact, he says, "I believe kids as young as three should start cooking with their parents and grandparents."

Knives no bar
At this age, he recommends, "Get them involved in the cooking process by asking them to shell peas, knead or roll dough for rotis or chappatis or pasta, and mix batters for cakes and biscuits." He's careful to stress that you don't want your child around the stove, microwave or oven at this time though. At 8 or 9 years, Joshi believes, most kids are ready to take up a cooking class. He feels, "This is a good age to impress the importance of washing their hands upon them. Clean as you go, is a phrase I use often in my kitchen, as I believe it is important to teach kids about personal hygiene and to keep their workstations clean. I would start to teach knife skills when they are over the age of 15 or 16."

Tarla Dalal's classes
That recognised food writer and chef Tarla Dalal's grandkids Anya (10) and Aria (5 ½) love to cook, comes as no surprise. "The girls always want to play MasterChef and plate their desserts," shares their mother Mona. "They know how the pressure test is done and my older daughter records the show so she doesn't miss a single episode -- she goes through the entire gamut of emotions with the contestants -- and they both love to pretend to be part of the contest," she explains, adding that it's not just her kids who are drawn to cooking, though. "I find that loads of kids from the age of 4 to 12 have taken an interest in MasterChef," says Mona. She points out that while the show has certainly piqued the petite public's interest, "Most kids have a natural inclination towards cooking. Sadly, they're not as exposed to it here as they could be, because sports and music et cetera are higher up on the priority lists of most mothers."

Mona tells us she had a chance to observe how much children appreciate cooking during Anya's 10th birthday party, where games were based on the junior chefs TV show. "That my mother-in-law's Gol Gappu storybooks, which lead kids from the age of 1 ½ to 5 through basic recipes have been selling well for the last 3 years, also supports the fact," she adds. Determined to offer these enthused kids a platform to perfect their skills, the Dalal family now plans to initiate a 3-month kids cooking course (complete with a graduation certificate), "we're still in the planning process, but the interest has been
tremendous."

Set the ball rolling
Stocking your kitchen with kid-friendly gadgets is one way to tempt your kids to try their hand at cooking. Here are some safe tools that kids would find easy to use:

Egg whisk: Available everywhere, this simple gadget works better than a fork as it allows for maximum aeration.

Pastry brush: When your kids are younger, this is a simple way to get them interested in baking. For a crisp crust, have them brush egg whites onto puff pastry before you put it in the oven.


Sifter: Whether you're making cake batter or your daily chapattis, give your child a chhanni and entrust them with the task of sifting the flour.

Measuring spoons, cups and scales: If you want your child to feel like he or she is in charge, here's a gadget that will do the trick. Let her or him look after the measurements completely.

Mini aprons and gloves: You can get these made if you can't find the right size, but arm your kids with chef's hats, aprons and oven mitts and they won't leave the kitchen in a hurry.


Promoted
Listen to the latest songs, only on JioSaavn.com