Men's Diet: Consuming Over 10 Portions Of Tomatoes Per Week Linked With Lower Risk Of Prostate Cancer

A new study has now said that a diet rich in tomatoes may help reduce risks of prostate cancer. 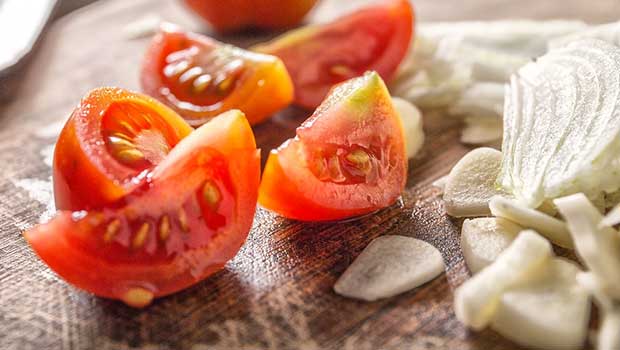 Tomatoes may be key to reducing risks of prostate cancer, says study

The humble savoury fruit tomato that is used in numerous dishes and even drinks is a treasure trove of beneficial nutrients. One of the most important one is the antioxidant lycopene, which is credited with a number of its major health benefits to the human body, including reduction of risk of heart diseases and according to some research, certain types of cancers as well. Tomatoes are also great sources of Vitamins C, K as well as folate and potassium. A new study has now said that a diet rich in tomatoes may help reduce risks of prostate cancer. The study indicated that men who consumed over 10 portions of tomatoes may have better chances of not developing prostate cancer. The cancer targets the prostate gland, which is a tiny walnut-sized organ that produces seminal fluid.

The study was published in the journal 'Cancer Epidemiology Biomarkers and Prevention'. The study said that prostate cancer is the second most widely diagnosed cancer in men worldwide and the rates of this cancer are higher in developed countries as compared to developing countries. This may be due to the westernized diets lifestyle, said the study. The study was conducted by researchers at the Universities of Bristol, Cambridge and Oxford. They looked at the diets and lifestyle of 1,806 men with prostate cancer, aged between 50 and 69 years. They compared these with diets and lifestyle of 12,005 cancer-free men.

A number of dietary elements were identified as key to reducing risks of prostate cancer, among which were tomatoes and their products and baked beans. Consumption of over 10 portions of tomatoes per week was found to reduce risks of prostate cancer by 18 per cent and this is thought to be due to the presence of lycopene in tomatoes, which fights of toxins that cause cell damage. Vanessa Er, from the School of Social and Community Medicine at the University of Bristol and Bristol Nutrition BRU, who led the research said, "Our findings suggest that tomatoes may be important in prostate cancer prevention. However, further studies need to be conducted to confirm our findings, especially through human trials. Men should still eat a wide variety of fruits and vegetables, maintain a healthy weight and stay active."