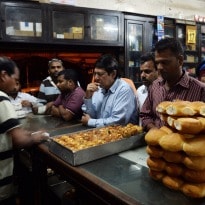 In the late 19th and early 20th centuries, hundreds of eateries known as Irani cafes sprouted up in Mumbai due to a wave of Persian immigration. One of the most famous of the remaining few is now set to close.

B. Merwan & Co, captured in a series of AFP photos, has served up sweet milky tea and bread buns to busy workers in the bustling seaside city for a hundred years but is set to close its doors for the last time in March. In their heyday, the street-corner, high-ceilinged Irani cafes served businessmen, labourers and prostitutes alike with their omelettes, cardamom-spiced mawa cakes and the "brun maska" bread-and-butter rolls.

Listen to the latest songs, only on JioSaavn.com
Today fewer than 30 of them remain in India's financial capital as they struggle with competition from modern chains, high real estate prices and the reluctance of younger family members to continue in the café tradition. Loyal patrons of B. Merwan, which sits opposite Mumbai's busy Grant Road station, are saddened at the thought of no longer queuing for its celebrated cakes, which are often sold straight from the oven."I have been coming here for 20 years," said Karsi Mehta, a local businessman, as he tucked into a vegetable puff and a cup of tea. "Sadly it seems we will have to adjust to whatever hotel is nearby once Merwan closes."