Neha and Angad celebrated their second wedding anniversary on 10th May. The celebrations had to be a low-key affair because of the nationwide lockdown, but it seemed that the couple managed to have a gala time anyway. 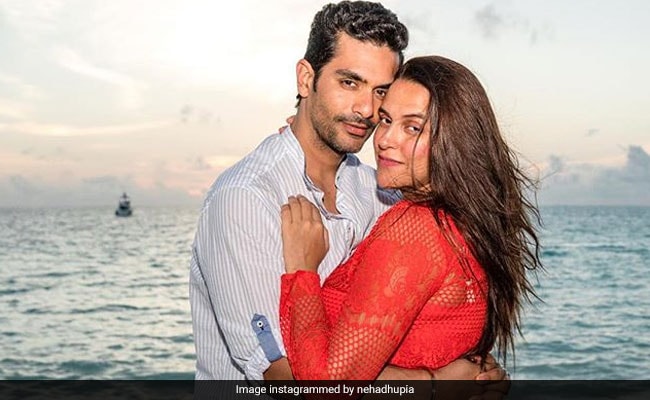 Actress and television star Neha Dhupia and actor Angad Bedi tied knot in a hush-hush affair in Delhi, back in the year 2018. The news took many Bollywood actors by surprise too, since it was such a closely guarded secret and the couple wanted it be an exclusive event to be attended only by close family members. Wishes poured for their marital bliss from all corners of the industry, and a few months down the line, the couple had another good news to share with the world. Neha and Angad welcomed their firstborn, Mehr Dhupia, in November 2018. The star baby along with their star parents has been an internet favourite since then.

Neha and Angad celebrated their second wedding anniversary on 10th May. The celebrations had to be a low-key affair because of the nationwide lockdown, but it seemed that the couple managed to have a gala time anyway. Neha Dhupia took to Instagram to post some pictures from their anniversary celebration. In the pictures, we can see two cakes, a dense chocolate for their anniversary, and the mango cake to mark the Mother's Day that coincided with their anniversary.
In the pictures, we can see the happy couple and baby Mehr relishing the creamy cakes and enjoying the moment.

Neha Dhupia has her kitty full with a variety of reality shows, podcasts and movies. Angad on the other hand was last seen in the movie 'Zoya Factor'.