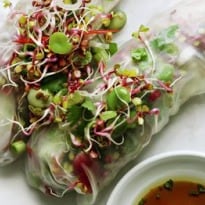 Wrapped in rice paper or served on lightly toasted sourdough, broad beans make a simple supper into a feast

Age may wither the broad bean, but whether they are the size of a pea or a thumbnail, there is always a way to use them. While the beans are young, barely longer than your index finger, you can eat them pod and all. A few weeks on, each shelled bean no larger than the diameter of penny piece, they are good for eating in their thin paper skins. Even when they are as old as the hills, when the pods are lumpy and the shape of the beans is clearly visible through the fur-lined pod, they can be steamed, popped from their skins and mashed to a creamy paste for eating with flatbreads.

First things first. The point of growing your own, surely, is the chance to eat things you can rarely buy in the shops. So this is the opportunity to pick and eat broad beans when they are barely old enough to qualify for the name, the pods supple and crisp, the beans no bigger than an M&M. You can put them, in a single layer, in a shallow baking dish of water, bright, fruity olive oil and a bunch of mint and bring them to the boil. Turn down the heat then leave them, the water barely bubbling, until the colour has darkened and the soft sage-green pods are pliable. Eat them with thick yogurt into which you have folded in a little olive oil that you have blitzed with dill fronds to give a luminescent green oil.

Stripped of their long outer pods the beans, their skins intact, can be boiled, chilled and tucked into the translucent white wrappers of a summer roll or stirred through a couscous salad with chopped mint and parsley, feta cheese and roasted cherry tomatoes. You could use them in a green minestrone with a puddle of basil oil glistening on the surface, or serve them alongside warm, thick-cut ham, tossed in butter into which you have stirred some lemon juice.

As the weeks slide past, the pods get more knobbly and the beans' tight tissue-paper skin gets thick and greeny-grey. It needs to go. Cook the beans as usual, but once they are ready, drain them and pop them out of their skins. This is a kitchen job I will admit to enjoying as much as any. Serve them in a little butter, cream or olive oil seasoned with chopped mint, or blitz them in the food processor with olive oil, chopped garden mint or dill, or both, and when you have a rich whipped paste, spread it on sourdough toast and trickle it with oil. Young or old, there is always a use for the broad bean.

The large spring roll rice-paper wrappers are the ones to use here. They are available from Chinese and Vietnamese food shops and larger supermarkets. The rolls make much better eating if the beans are skinned.

Bring a pot of water to the boil and salt it lightly. Pod the beans, drop them into the boiling water and let them cook for 6 or 7 minutes if small and young, a little longer if larger. Drain the beans and refresh them under cold running water.

If the beans are small, leave them in their skins. If they are any larger, then squeeze each one gently to pop it from its pale papery skin. Discard the skins and set the beans aside.

Season the steak and grill or shallow-fry it in a little oil for 3 or 4 minutes on each side until nicely browned on the outside and pink on the inside. Set the meat aside to rest.

Slice the steak in half and then into thin strips. Briefly soak the spring-roll wrappers in cold water, one at a time, until they are transparent. Gently place them, one at a time, on the work surface, then place a thick line of steak strips, cucumber, radish, chilli and sprouted seeds down the centre of each. Roll the wrapper around the filling, pulling it carefully into a thick, long cylinder, folding the ends over to seal. Place the rolls in a single layer on a serving dish.

To make the dipping sauce, mix the soy and mirin together, then add the finely chopped chilli. Finely chop the coriander leaves then stir into the soy-sauce mixture.

You could use buffalo mozzarella rather than the softer, more tender and milky burrata if you prefer. If you use large beans, pop them from their skins after cooking.It will only takes a few minutes and will results in more tender beans and a better-looking dish.

Pod the broad beans and boil them in deep, lightly salted water until tender, then drain and refresh under cold running water.

Put the cherry tomatoes in the bowl of a food processor and add the basil and a little salt. Process to a coarse purée, then stir in the oil.

Toast the sourdough lightly on both sides. Spread half of the tomato dressing on the warm toast. Divide the burrata, and the beans, between the two pieces of toast. Spoon the rest of the dressing over the top and trickle a little olive oil over each.