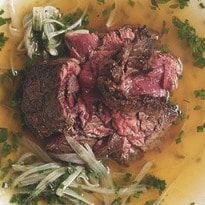 Peel and thinly slice two shallots and put them into a deep pan with a tablespoon of oil and the leaves from six small sprigs of thyme. Stirring regularly, cook the shallots over a moderate heat until they are soft and pale. Add three shredded sage leaves, then pour in 500ml of stock and simmer gently.

Lightly oil and season a 400g piece of skirt or rump steak. Warm a shallow, nonstick pan over a moderately high heat, add the steak and brown briefly on both sides. Add a 40g piece of butter to the pan, let it melt and start to fizz then continue cooking the steak, basting the meat with the butter until the steak is cooked to your liking. Remove the meat from the pan and let it rest, covered lightly with foil, in a warm place. Finely chop two tablespoons of parsley and two of chives. Slice the meat thinly, then divide it between two large soup bowls. Add the chives and parsley to the broth then ladle in the herb broth, spooning in the shallots as you go. Serves 2 generously.

Skirt is a thin cut, and will cook exceptionally quickly. As soon as it has browned on the outside, start basting with the butter, then lift it out to rest after just a couple of minutes. Rump will take longer. Resting the meat is essential. To get a clear broth, remove any froth that may rise to the surface as it simmers. A piece of kitchen paper wiped across the surface is a neat trick for removing the froth.

Chives and parsley have a natural affinity with beef, but you could also use tarragon or chervil to good effect. A vegetarian version of this dish can be made using thick slices of porcini in place of the meat, basting them in exactly the same way. Slice them thinly and add to the broth.

Email Nigel at nigel.slater@observer.co.uk or visit guardian.co.uk/profile/nigelslater for all his recipes in one place

Photo: "A vegetarian version of this dish can be made using thick slices of porcini": Nigel Slater's skirt steak with herb broth. Photograph: Jonathan Lovekin for the Observer