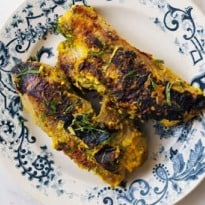 Set aside four lamb steaks, about 200g each. Peel and crush a large clove of garlic and pound it with a pestle and mortar with half a teaspoon of fennel seeds, then add a teaspoon each of turmeric and ground coriander, and a little black pepper. Put 250ml of yogurt into a mixing bowl, then add the spice paste and mix well. Put the lamb steaks into the yogurt and leave for an hour or so. Remove the steaks from the yogurt with some of the spiced yogurt sticking to them and fry in a hot, shallow pan until a crust has developed. Then turn and cook the other side. Serve with rice. Serves four.

Let a crust form on the outside of the lamb during cooking. The marinade needs time to crisp, so put the lamb down in the pan and leave it for some time to develop a dark crust before you move it or turn it over. The essence of the dish is the contrast between the charred edges of the crust and the sweet, rare meat within.

You could easily do this recipe with chicken breasts. Leave the skin on, and take care not to overcook. You could introduce a little cardamom to the marinade. Finish the dish with coriander leaves, mint and a squeeze of lime juice.

"The essence of the dish is the contrast between the charred edges of the crust and the sweet, rare meat within". Photograph: Jonathan Lovekin for the Observer