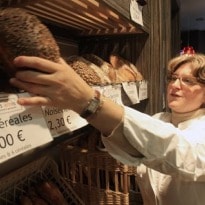 The country that gave us the words 'restaurant', 'bistro' and 'cuisine' is changing how it eats.

For the first time in France, fast food overtook traditional restaurant receipts as the economic crisis deepened, and the share of people who pack a lunch for work is rising faster by the year. Meanwhile, lurid reports of the increasing number of traditional restaurants resorting to frozen pre-packaged meals to hold down their prices have shaken France's sense of culinary identity.

French lawmakers have swung into action to protect their cuisine, which the government officially considers a matter of national pride -- even to the point of persuading UNESCO in 2010 to put French cuisine on its World Heritage List.

"I don't want chefs replaced by microwaves," said Daniel Fasquelle, a lawmaker in the French Assembly who voted recently for a measure that would require restaurants to print "fait maison" -- or homemade -- on menus next to dishes that were created from scratch.

Fasquelle said the legislation, which was approved in the lower house and goes to the Senate in the fall, is weaker than what he and other culinary warriors want but represents a step in the right direction. Fasquelle is part of a movement seeking to limit what can be called a "restaurant" to places where more than half the food is made in-house. The idea is to protect "true cuisine" and force the fakers -- who would have to find a more appropriate word, such as "caterer" -- to fess up.The harsher measure died in the Assembly earlier this year but Fasquelle and his cohorts plan to propose it again in September. The legislative pushes have parallels to requirements French bakeries were subjected to in 1998, when the word "boulangerie" was legally reserved for establishments that made bread from scratch -- and using a freezer at any point in the process strictly prohibited.

Amid the parliamentary uproar, most French workers -- increasingly pressed for time and money -- are unlikely to probe too deeply.

Lunches that have traditionally run two hours or even three hours in the south are being cut short by the modern work day. According to a 2011 study, the French midday break is down to an average of 22 minutes, compared with nearly 90 minutes two decades ago. And a study this spring found that a fifth of French workers are bringing their food from home to eat at work -- double the percentage just three years ago, according to a survey this spring from industry consultant Gira Conseil.

According to the study, fast food expenditures have surpassed traditional restaurants for the first time, making up 54 percent of receipts.

But don't think that French fast food means strictly McDonald's, whose sales in France are slumping this year, according to their most recent quarterly results.

One of the biggest drivers of the fast food trend are the very French boulangeries that were subject to regulation back in the '90s. These days they've become masters of serving up delicious quick meals for the price of a Big Mac and fries -- and these come under the category of "fast food."

For Estelle Levy, who opened a bakery two years ago in Paris, the choice was clear. A traditional French bakery has three producers: one to make bread, one to make pastries and cakes and a third to make breakfast fare like croissants. She decided to forgo the croissant specialist and hired a cook to serve quick meals instead.

"The day that I don't make bread, my business is over," she said, seated next to the espresso machine in her dining area. "But my bakery wouldn't be viable if I didn't serve food."

More than a third of her income is from the lunches, she said. Most of her customers grab a sandwich, a pastry and a drink and take off. A few linger at the handful of tables she set up facing the display cases containing pasta, quiches and desserts. The bread is there, of course, but it's tucked behind the counter.

While bakeries like Levy's are cashing in on the fast food trend, so are supermarkets. This spring Carrefour, the hypermarket chain, began offering a new line of what the French call "snacking" -- because a meal on the run is considered just that.

A small dessert is expected at even the most rushed of meals, and the idea of a meal eaten while walking or driving is anathema. Carrefour, which like any established restaurant accepts the subsidized vouchers that many French office workers receive to buy lunch, prices the new meals well within their 7 to 8 euro ($9-10) daily midday budget.

It all means traditional restaurants are getting squeezed and have been quietly reacting by turning to a pair of scissors and a microwave -- reheating outsourced ready-made meals, said Fasquelle, the lawmaker. He thinks it's a quick-fix solution that will create a long-term problem for the entire country.

"Forty percent of tourists come here for our cuisine," he said. If food quality continues to deteriorate, he added, at some point jobs will be at stake. "France is not like other countries when it comes to cuisine. It's the country of good food, good wine."

It's hard to find anyone to publicly defend the idea of using frozen, prepared foods in a restaurant. This is, after all, the same country where a group of angry farmers tore apart a McDonalds in 1999. But according to Synhorcat, the national restaurant and hotel union, only about 55 percent of restaurant meals are made in-house from fresh ingredients.

"The French are modifying how they eat, not only fast food, but also at the high end," said Bernard Boutboul, who led the study. "And everything that is mid-range in France is less and less popular because it's of lower quality, lower flavor."

That's perhaps borne out with the latest sales figures: The union that represents major French restaurants, including national chains, on Monday said the number of visits had fallen by 13.2 percent compared with the same period a year ago.

What people in France eat when they dine out is of vital importance to national health as well as culture, said Denis Machuel, head of the unit of Sodexo that issues the majority of the country's subsidized restaurant vouchers. In one of the company's surveys, he said, nearly two-thirds of people said they needed a break at lunch because "it's a moment to enjoy life."

Machuel, at least, hopes that traditional restaurants will regain the edge they held in France for so long. "I still see a significant resistance" to fast-food, he said.

Alain Tortosa, who started a website and guide of restaurants that cook from scratch, is less sanguine.