Rum Do: How a Bit of Bundy is Shaking Up the Cocktail Circuit in Melbourne 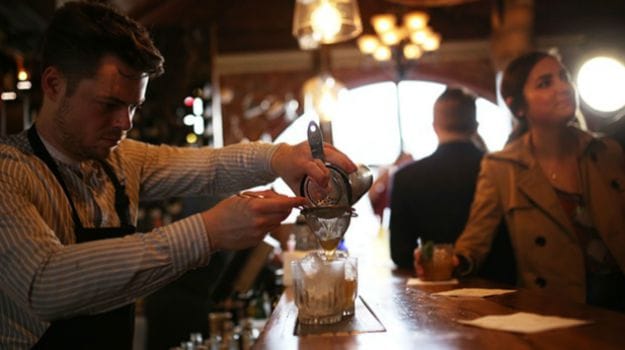 The average person doesn't remember all the things that are in their cocktail, but they'll remember if it was delicious

Australia's Bundaberg Rum, more commonly referred to as Bundy by its fans, may not be the first spirit that springs to mind when considering world-class drinking. Its stereotype of being a particularly popular drink among working-class, uncomplicated young men is a tough one to shake, at least among Australians.

But for Jeff Bell, who runs the world-renowned cocktail bar Please Don't Tell, or PDT, in New York, Bundaberg has proven an inspiration. Bell has brought his bar to Melbourne for four nights only to showcase his mixes, dubbed by those in the bar-tending industry as being among the best in the world.

While the bulk of the Melbourne PDT drinks list has been borrowed from its headquarters, Bell has incorporated Bundaberg, which is not imported into the US, into the pop-up's menu.

"It was a lot of fun to work with because it had a distinct flavour, it's made from a different cane which is grown in a different soil than other rums. I've tried rums all over the world, and it's a flavour that's not replicated anywhere else. Using Bundaberg was an opportunity to showcase out thought process, and the way we think about building on the base drink."

The creative yet refined resulting blends are a far-cry from the sickly-sweet pre-mix drink Australians may associate with the rum.

There's the "Australian Libre"; a drink inspired by the traditional Cuba Libre but, rather than pairing the rum and lime with cola, Bundaberg small batch is muddled with demerara sugar, lime, and tiki bitters, a type of bitters infused with cinnamon and allspice. It's a bold concoction with a strong cola kick, and unlike a Cuba Libre, the flavours are more elegant, more spicy than sweet.

Then there's a Bundaberg and spanish brandy concoction, dubbed "Tying the Sheets," mixed with lemon, green walnut, preserved figs and demerera sugar. I don't try this one; instead as a gin lover, I opt for the Nichol Buck, a drink taken from the New York menu and which basically tastes like a very alcoholic lemon and honey drink. For this one, Tanqueray number 10 is combined with sherry, lemon, honey and ginger beer and garnished with a lemon slice and candied ginger. It's a sweet and sour infusion, with a spicy twist.

Yes; the drinks are among the very best cocktails I've tried. You'd expect that from a barman that was once selected to mix for Oprah Winfrey " Bell served her tequila mixed with lemon, Cilantro, orange oil and egg white. Despite not being much of a bourbon drinker, I try the strong, Bulleit-based "Sweet Tea Smash". Combined with an Italian herbal liqueur, strega, and iced-tea, the mix is warming on a chilly Melbourne night. The ingredients are simple but together, create a complicated flavour that softens as the ice melts.

But it's not just the mixes that Bell says is key to a successful cocktail venue. As much thought has been put into the decor, which strongly replicates PDT New York and features dimmed lighting, taxidermy and empty spirit bottles hanging from the ceiling. Borrowing inspiration from prohibition-era speakeasy's isn't exactly new, but in New York, Bell was among the first to do it, and it does feel more sophisticated than gimmicky.

"The average person doesn't remember all five or six things that are in their cocktail, but they'll remember if it was delicious," Bell says.

Related: Five top new places to eat in Richmond, the 'Switzerland of Melbourne'

"They'll remember the time that they had, if the lighting was too bright or dark, if the music was too loud or if the room was too cold or hot. Great bar-tending is about the whole experience and making sure people are comfortable. That's what makes people have a positive memory of you, and means they will spend money at your bar."

Recommendation: "The Australian Libre" paired with "The Spicy Redneck" - house sausage wrapped in bacon, chilli, coleslaw and jalepeno and served in a hot-dog bun.