Say Hello to 'Tomatan', A Robot That Feeds You Tomatoes 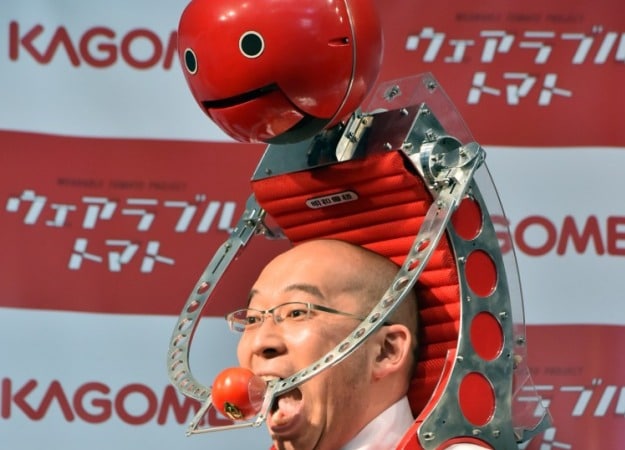 As the world's electronic companies scramble to set the agenda for wearable devices, one Japanese vegetable juice maker went one better, unveiling a wearable tomato machine.

The "Tomatan" is a backpack that can be loaded with six mid-sized tomatoes, enough, say the makers, to power runners through this weekend's Tokyo Marathon. "Tomatoes have lots of nutrition that combats fatigue," said Shigenori Suzuki of maker Kagome.

The Tomatan looks like a small humanoid robot -  with a tomato for a head - and sits snugly on the athlete's shoulders. Tugging a tiny lever in the foot moves the arms to catch a tomato from the shooter. It then rotates the fruit over the runner's head and holds it in front of his mouth.

Promoted
Listen to the latest songs, only on JioSaavn.com
"We used about 100 tomatoes to complete this machine," said Nomichi Tosa of creator Meiwa Denki, a company known for its off-the-wall devices and musical instruments. "We focused mostly on its visual design."

Despite the eight-kilogramme (18 pound) weight, Kagome's Suzuki said he will don the device for a a five-kilometre (three-mile) fun-run event on Saturday. "I will run by his side carrying my tools, just like an F1 mechanic," Tosa said.

Comments In Sunday's full Tokyo Marathon, a runner from Kagome will participate with a lighter wearable tomato machine - the Petit-Tomatan - which weighs only about three kilogrammes, Suzuki said.