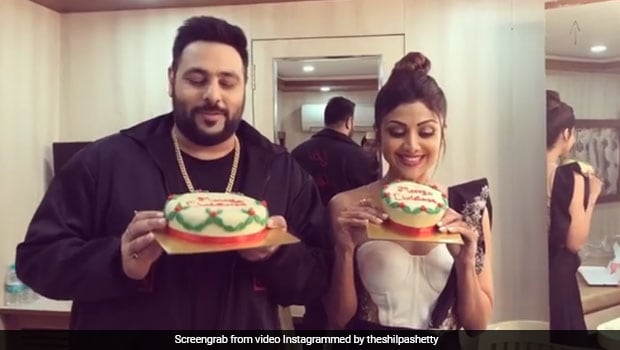 Highlights
That Shilpa Shetty is a foodie is a fact that everyone who is remotely familiar with the diva, knows. The actor posts videos of herself gorging on sinful delicacies and the most decadent foods, on a regular basis. Shilpa's 'Sunday binge' videos are especially popular and have earned her a substantial following on her Instagram page. Even people who are not fans of her acting or Bollywood movies, keep abreast with her weekly foodie adventures, because honestly they're just super addictive!

What her fans can't figure out though is how Shilpa manages to keep fit despite her weekly indulgences. This Christmas, for example, Shilpa did something that had us craving for a gooey creamy Christmas cake and also made us extremely jealous. Shilpa was joined by popular Bollywood rapper and Indian popstar Badshah, on her weekly Sunday binge video. They each held a Christmas cake and after a brief spell of expressing their excitement about yuletide, they proceeded to their cakes straight out of the plate, without waiting to even cut a piece off!

Shilpa wrote on her Instagram, 'It's past 12 am,technically a Sunday..it's a "wrap" so that called for a #sundaybinge with the #badshah of "Rappers"@badboyshah "Kar le rahem tu karle rahem "( inner monologue to the calories )..Ushering Christmas with true Christmas swag.' She also referenced the chef who baked the plum cake with marzipan frosting in the post, and it was none other than Pooja Dhingra of Le 15 Patisserie. For the uninitiated, Dhingra is known as the 'Macaron Queen of India' and is responsible for making India fall in love with the French macarons. What we're trying to say is, the cake had to be supremely delicious, for sure.

Shilpa was also given a special task by Badshah- they both had to sing a Christmas carol while eating the cake. The duo chose the classic 'Rudolph the red nosed reindeer' and ate away to bliss, as we could just watch the delicious looking festive cake disappear before our eyes. No fair, Shilpa!