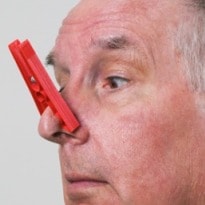 A recent study from the University of Exeter has been reported as showing that smelling farts can cure cancer, as well as many other diseases. Although the study itself doesn't actually say this at any point, if farts do have healing powers it would have numerous wide-reaching implications

It seems like it was only last week that a study by the University of Exeter revealed that smelling farts cures all manner of fatal illnesses, which lead to a lot ofmediacoverage about the healing properties of nether-region emissions.

Some cynical types tried to combat this, metaphorically lifting the duvet from the growing cloud of excitement. Sure, the actual study was far more complex, and didn't specifically reference farts, just hydrogen sulphide, a gas produced by natural bodily processes that gives flatulence its unpleasant odour. The study claimed that targeted delivery of compound called AP39 causes more hydrogen sulphide to be produced by an ailing cell, and hydrogen sulphide in small doses can prove protective to the cell's mitochondria, which supplies the cell's energy and is often damaged by diseases. Hydrogen sulphide preventing this mitochondrial damage therefore can help cells resist the progression of many diseases.

Of course, for many in the media, "hydrogen sulphide delivery helps prevent disease damage in cells in certain disease models" will always be trumped by "farts cure cancer" when it comes to headlines. But, for once, it turned out that the wild extrapolations were true, and smelling farts really did cure major illnesses. And as one might expect, the consequences of this were sudden, unpleasant, and lingered for a long time afterwards.

Firstly, a lot of the underlying science had to be re-written. It was widely believed that inhalation of high concentrations of hydrogen sulphide was very harmful to health, not beneficial. It was also believed that smelling a fart merely meant the component gases entered the lungs and were largely just exhaled again, not absorbed efficiently and delivered to diseased cells.

Many scientists also wondered why this phenomenon hadn't been observed before now, considering that the average person is supposedly farts about 14 times per day but there have always been plenty of sick people around despite constant exposure to these human emissions. The obvious counter to this argument is that, without the healing properties of flatulence, sickness rates could be much higher than they are. On top of this, studies revealed that people rarely break wind around the terminally ill, due to awkwardness and fear of saying something insensitive resulting in increased "clenching" of the relevant sphincters.

Once the life-sustaining properties of flatulence were widely known, there were many social consequences. People who openly farted around others were no longer treated with disdain but with grudging respect. But contrastingly, farting lost a lot of its humorous associations, as people came to view a fart being made for comedic effect as a fart that could now not be used to save a life, as if the dispenser had just poured a litre of blood down the drain for a joke. Such things were deemed unacceptable. When the Red Cross adopted the phrase "Pull my finger" as the slogan for its campaign to increase donations of flatulence for disaster victims, a classic joke was essentially lost forever.

For a long time, the main source of flatulence for medicinal purposes was that donated by humans. As human flatulence has never conformed to a predictable schedule, personal waste-gas collection attachments, or "belt balloons", became a common site. As use and demand increase, much flatulence was eventually harvested from domestic cows, a practice which had the unexpected but appreciated consequence of slowing global warming.

With flatulence encouraged, people started eating more flatulence-producing foodstuffs, especially those foods that included beans and a lot of spice, resulting in Mexican cuisine achieving global dominance in under a month.

As is usually the case with major social changes, certain people were unable or unwilling to adapt. Those who refused to embrace flatulence and donate their emissions because they considered it rude or vulgar were eventually labelled "too grand to guff", and in a cruelly ironic twist, eventually became social outcasts.

There were, of course, many negative consequences. The uses of flatulence in mainstream medicine lead to the underlying concepts being seized on and quickly corrupted by alternative medicine adherents. The idea that "if one bodily emission cures diseases, they all do" quickly took hold, and lead to an increase in spread of diseases as sick people were coughed on, sneezed on, belched on or... worse, by those who claimed that doing so would help them.

Many also criticised the reversal of the public smoking ban in the UK, which occurred after successful campaigns based on the fact that increased flatulence had now made public places smell far worse than cigarette smoke ever did. Those who complained about the dangers of passive smoking were invariably dismissed by those who pointed out that the healing properties of farts will cancel them out. Some pubs and restaurants tried to introduce dedicated "farting areas" on their premises, but these so-called "Dutch ovens" never really caught on.

And as ever, it was Ryanair who delivered the most shameless attempt to cash in on the therapeutic benefits of intestinal gasses, by cutting back on the air filtering on their flights and charging passengers an extra "indirect gaseous medicinal administration" fee.

At this point, you may be thinking "but this is nonsense; none of this happened, it's just someone with a media platform extrapolating wildly from something someone else wrote and presenting it as fact".

Yes, that's exactly what it is. But as we saw in the first 2 paragraphs, this sort of thing is apparently fine.

Dean Burnett prefers to deliver his unpleasant outbursts via the odourless medium of Twitter, @garwboy

Something smell rotten about these reports of farts curing diseases. Photograph: 33344.000000/Getty Images