Simple Tricks to Remove Pesticides From Fruits and Vegetables 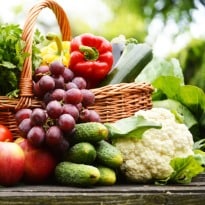 Believe it or not, pesticides might be present in fruits and vegetables we eat. They are primarily used during the cultivation of crops and in some cases may remain as residues. Recently many advocacy groups and NGOs conducted random testing on fruits and vegetables and found unacceptably high amounts of pesticide residue in them. According to the Centre for Science and Environment (CSE), "high levels of pesticide residues can be toxic enough to cause long-term cancer, damage to the nervous and reproductive systems, birth defects, and severe disruption of the immune system." (More: Pesticide minimizing measures to be publicized in Delhi: HC)

While steps are being taken by the government to sensitize farmers and vendors about the side effects of using pesticides, health experts suggest consumers explore alternatives like organic food. Even though the mere presence of pesticide residue in food does not imply that they pose a great health risk, you should be extremely careful of what you buy and where you buy it from. You should also take certain measures to minimize any kind of health damage. Here are three simple, do-it-yourself tricks you can adopt at home:

Wash Your Food and Wash it Right

Whip up a solution with 10 percent white vinegar and 90 percent water and soak your veggies and fruits in them. Stir them around and rinse thoroughly. Be careful while washing fruits like berries, and those with a thin peel as the solution might damage their porous outer-skin.

Treat your vegetables to warm water for a short while and this should remove any leftover residue. Peeling is another efficient way to remove residue and comes highly recommended especially when there might be some residue in the crevices of the fruit. Also, when cooking with chicken or meat, cut off the excess fat and skin as it could have absorbed unwanted pesticide residue.