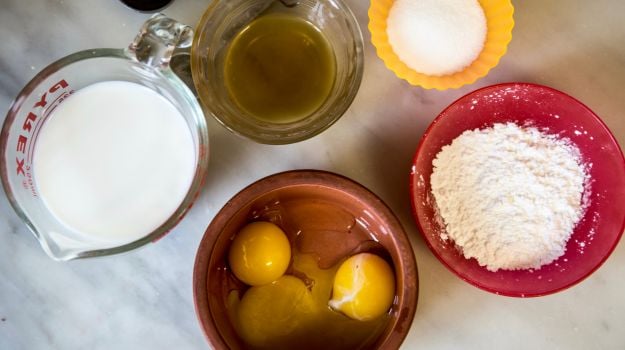 The ingredients for the boozy cream filling for the Carnival Doughnuts are remarkably simple. Credit: Copyright 2016 Michael Krondl

Two hundred and one years ago today, Europe's glitterati were assembled in Vienna to dance, eat doughnuts and decide the fate of the world, not necessarily in that order.

The Congress of Vienna, as it was known, would make Davos seem like a convention of disheveled accountants. The 1815 Congress was attended by two matched sets of emperors and empresses, four kings, one queen, two crown princes, three princesses and armies of hangers-on.

Technically, the conference was political, meant to reestablish the Old World order, but most of the gossip was about who danced with whom, and who threw the swankiest Mardi Gras do. And during Carnival, no party was a party without great piles of jelly doughnuts or Faschingkrapfen, as the locals still call them. According to news reports, 8 to 10 million of Vienna's beloved doughnuts were eaten during the 1815 carnival season.

Fried dough is traditional in many Catholic countries during the topsy-turvy period of Carnival, when men dressed as women and sweet doughnuts replaced plain bread. There used to be at least some practical dimension to cooking your yeast dough in fat, since the lard used in most frying was to be off limits for the duration of Lent. It's one reason Shrove Tuesday is known is as Mardi Gras, or "Fat Tuesday."

The sin of gluttony

But there is also a theological dimension to indulging in the sin of gluttony. One of the undeniable charms of the Catholic faith is the ability to sin Friday night and repent the following day. With Carnival, that idea is writ large: There's no point in having six weeks of Lenten penitence if there's nothing to be penitent about -- which is why the whole point of the Mardi Gras is excess, transgression or, to give it a theological dimension, sin.

And what could be more indulgent and sinful than a giant platter of fried, sugary dough balls? If you can include a little booze, as in the recipe that follows, so much the better.

Today's Austrians are still at it, celebrating the prelude to Lent by consuming vast amounts of fried dough, typically filled with jam, chocolate custard -- or my favorite, a boozy custard variation flavored with an eggnog-like tipple called Eierlikor. Elsewhere in Europe, Carnival fritters take on myriad shapes and flavors, whether it's a twisted pastry, as they are in Lyons, France, or a boozy and fruit-filled fritter in Venice.

The habit was even imported to America. In Pennsylvania Dutch country, they make a doughnut called a fastnacht, the name deriving from a German word for Shrove Tuesday.

But few are as obsessed with the tradition as the Austrians. Viennese records attest to professional doughnut bakers existing in the 15th century. By the 1700s, we hear of Carnival doughnut shooting competitions, where the dough balls were catapulted into sky like clay pigeons. Apparently, the winner got to go home with a set of silver pistols.

(For more on doughnuts, see my book The Donut: History, Recipes, and Lore from Boston to Berlin.)

When jam was a luxury item

It's hard to imagine today, but the likes of Smucker's used to be a luxury food -- sugar-sweetened jam was the province of fancy confectioners. Accordingly, many "jelly" doughnuts were plain, or filled with some apple-sweetened concoction (fish guts was one favorite during the Middle Ages). In the decade before the famed doughnut congress, a really fine jelly-filled doughnut could cost as much as a multi-course dinner in a restaurant.

These days, the fried, jam-filled dough cushions are cheap and ubiquitous throughout Central Europe. Across Germany the recipe tends to be the same, but the names vary. In Bavaria, you will probably hear Krapfen (as in Austria), in Berlin Pfannkuchen is more common (elsewhere this might refer to a pancake) whereas to the west (though not in Berlin) they use the word Berliner.

The naming confusion led to the delightfully off-base urban legend about how in 1963, at the height of the cold war, John F. Kennedy stood before an adulatory crowd of 150,000 West Berliners and declared himself "ein Berliner." Or a jelly doughnut, according self-declared German grammar experts in the United States, who claimed that by including the article "ein" the President identified himself as a thing rather than a person.

Oddly, the story only first seems to crop up almost two decades after the fact, and would be repeated with ever more embellishment. As a quick troll through youtube.com will confirm, the president did, in fact, declare "Ich bin ein Berliner." But, as noted German linguist, Jurgen Eichhoff, points out, the speech was vetted by the president's German hosts, and it is perfectly fine German to declare your self in solidarity with the citizens of Berlin by declaring yourself, "ein Berliner."

It's a pity the speech took place in June. If the president had visited Southern Germany or Austria during Carnival and tasted even a tiny percentage of the cream and jelly doughnuts on offer, he may well have begun to resemble a jelly doughnut.

You can fill these doughnuts with jam, chocolate custard, prune butter or even Nutella, all of which are commonplace in Austria. Lemon curd is delicious too, if not exactly traditional. Like all doughnuts, these are best served as fresh as possible.

Flour for the work surface

Oil or shortening for frying

1. In a small bowl, stir together the yeast, 1 teaspoon sugar and 1/4 cup milk. Stir to dissolve. Stir in 2 ounces (about 1/2 cup) flour. Cover this "sponge" with plastic wrap and let rise in a warm place until doubled, about 20 minutes.

2. In a separate bowl, whisk the yolks until frothy. Gradually, whisk in the melted butter. Stir in the zest.

3. Transfer the risen sponge to the bowl of a stand mixer fitted with a paddle attachment. On medium-low speed, beat in the egg mixture, the remainder of the milk and sugar then about half the flour. Switch to a dough hook attachment, gradually add the remaining flour and finally salt. Beat on medium-low speed until the dough is smooth, shiny and elastic. About 5 minutes.

4. Remove the dough from the bowl and set on a floured surface. Knead very briefly to turn it into a ball. Set in a buttered bowl, cover with plastic wrap and let rise in a warm place until doubled in volume, about 45 minutes.

5. On a floured surface roll the dough about 3/8 inch thick and using a 2 1/2-inch diameter cookie or biscuit cutter, cut out as many circles as you can. Gather up the scraps and roll out the dough one more time cutting out more circles. This is easier if you let gathered up scraps rest for 5 minutes before rerolling.

6. Brush the edge of each round with water and mound a scant tablespoon of the cream in the middle of every other circle. Top each with the plain circle making sure the moistened edges touch. Press down on the edges spreading each doughnut slightly. Using the same 2 1/2-inch cookie or biscuit cutter dipped in flour, cut out each doughnut discarding the trimmings.

7. Brush doughnuts lightly with melted butter on each side. Set on a baking sheet lined with parchment and cover loosely with plastic wrap. Let rise until they are about fifty percent larger, any more than that and they will expand too much during frying.

8. Heat at least 2 inches of oil in a deep pan to 350 degrees F. Slide the doughnuts in one by one making sure not to crowd the pan. Fry until the underside is light brown, about 1, 1/2 minutes. Turn the doughnut and cook until the other side is brown, about 1 minute. There should be a pale "collar" around the middle of the doughnut where it floated above the fat. With a slotted spoon, lift out the cooked doughnuts and drain on a cooling rack set above a baking pan or on paper towels.

Eierlikor is a liqueur somewhat similar to bottled eggnog, though boozier and noticeably absent of nutmeg. If you have some, omit the rum. Combine 1/4 cup of the liqueur with 1 cup of milk and proceed with the recipe as written. Since the liqueur is sometimes hard to find, I have used rum instead though brandy or even a nice bourbon would work. If using rum, make sure it's aged and of a quality that's referred to as sipping rum, in other words complex enough to drink neat.

1. In a small, non-reactive saucepan, bring the milk to a bare simmer.

2. In a medium bowl, whisk together the egg yolks, sugar, rum, corn starch and vanilla until very smooth. Pour the milk into the egg yolks whisking continually.

3. Pour the milk mixture into a small saucepan over low-ish heat. Stir continually until it just begins to bubble. Remove from heat and whisk until smooth. If necessary, press through a fine sieve. Transfer to a bowl. Place plastic wrap directly on the surface of the custard and refrigerate until firm. If the custard is too thick, whisk in a tablespoon or two of milk. At room temperature, it should be the consistency of pudding.