Soju: the most popular booze in the world 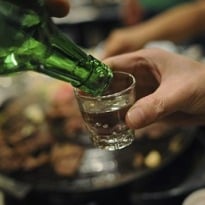 The South Korean spirit is the globe's best-selling alcohol. But they're not just drinking it in Korea these days - you can try chilled shots or soju cocktails in New York and London

Attention pub quizzers and booze geeks. There's a brand of one particular spirit that sells more than twice as much as any other in the world. Any guesses? If you said vodka, back of the class. The answer is soju, national hooch of South Korea. Jinro Soju - available at Waitrose and Amazon - has topped Drinks International's annual list of best-selling global spirits for years, notching up sales of 65m nine-litre cases in the 2013 list. That would be three times more than Smirnoff.

Soju now sells in 80 countries, with a rising profile helped by Korean superstar Psy, who not only proclaimed soju his "best friend" but also lent his dark-glassed visage to various campaigns to get the rest of the world smitten too. "K-Pop K-Shot" billboards sprouted across America, showing Psy clutching a bottle of Chamisul soju (available via Beers of Europe). A pioneering soju outlet at the LA Dodgers baseball arena sold out its supply after three games. In New York, bars hawk apple soju aperitifs and lychee soju slushies to Big Apple hipsters. On YouTube, the Psy 13 soju shot drinking contest may suggest how the star came up with his Gangnam Style schtick in the first place. I mean, who hasn't pranced around pretending to ride a horse after a few?

Psy is just sharing his countrymen's passion. In a country with the world's highest per capita alcohol consumption (hey, it can't be easy living next door to North Korea), soju takes a whopping 97% of the spirits market. But this is a drink embedded in Korean culture since the 14th century, when Mongol invaders taught the locals how to distill, with fermented rice as the traditional starter. Today, the final spirit ranges in strength from 45% ABV to more common varieties that hit your glass ataround 25% ABV.

As with most spirits there's good stuff and bad stuff about - the latter being low-grade muck made from sweet potatoes and tapioca rather than artfully distilled fermented rice. Look for respected brands such as Chamisul or the delightfully named Chum-Churum. If you're in Korea, search out Andong - a 45% ABV beauty so highly regarded it has been officially designated as Korea's Intangible Cultural Assets No 12.

In the UK, it's the less potent soju you'll find in Korean bars and restaurants, where many punters drink it neat, chilled in a shot glass. This is also, of course, a great chance to discover soju's ubiquity as a novel complement to nosh. Sitting neatly between wine and western spirits in terms of alcoholic kick, soju works well with a variety of food thanks to the subtlety of its flavours, with the best sometimes described with words like buttery, grainy or malty, with hints of sweetness.

With Korean foods, try it with street-food favourites such as tteokpokki (a rice and fish cake) or salted shrimp. "Soju is often drunk with jokbal, which is pork trotter cooked in a seasoned, well-flavoured broth," adds Chef Won, Korean chef at Harrods' Pan Chai restaurant. "It also goes well with bossam - steamed pork wrapped in a red lettuce leaf with garlic, peppers and kimchi."

You can adapt soju with flavourings too. In San Francisco, the renowned Tonight Soju Bar does a roaring trade in watermelon or pineapple soju paired with kimchi pancakes or kimchi fried rice. In east London, the Korean restaurant Jubo has joined in. "We have ginger and blackberry soju," says owner Leon Foong. "Both are infused for three-four days with natural fruits. We also have a soju mojito, and plan to increase the number of soju cocktails."

When it comes to soju mixology, a key British pathfinder is Alex Kratena - head honcho at the Langham's Artesian Bar, rated the world's best bar by those Drinks International folk. Having shaken and stirred in Seoul, Kratena enjoys playing with Psy's best friend. "When we first tried it at the Artesian there was a lot of doubt," he admits. "But it's about the right combination. We found it worked really well with mango." Kratena also admires soju's lowering of the alcohol bar to provide "lots of flavour without being too strong" - ticking the box on the trend for lower-octane cocktails that allow drinkers to knock back a few without falling over.

If you love beer, meanwhile, you have to learn about somac - the multiple ways Koreans mix beer with soju in a process they call "manufacturing". Key variables include ratio and mixing methods. The most popular ratio is 30% soju to 70% beer, though standard 200ml Korean beer glasses often come with clearly marked gradations to help people "manufacture" to whatever ratio they want.

As to preparation methods, consider the classic somac known as the Hurricane. Fill a glass with your chosen proportion, cover with a tissue, slap your palm over it then twist sharply to create a swirl inside - a mini hurricane. Don't worry if the tissue gets soaked. This is not only normal, but allows you to indulge the Korean habit of then throwing it vertically to try to stick to the ceiling.

Photo: A shot of soju: 'The best is described as buttery, grainy or malty, with hints of sweetness.' Photograph: Washington Post/Getty Images